During last weekend’s trip to the Oregon Coast I took some photographs that due to the high contrasts within the composition, I thought would look good converted to monochrome. When shooting with B&W already on my mind, I typically set my camera to a monochrome preset (most modern cameras have that feature). So when composing, I’m looking already at a monochrome image in my viewfinder or on my LCD screen. This helps me judging the impact of light and contrast before pressing the shutter. Maybe this is not the right approach for a purist, but I gladly take this as a great supportive feature of modern cameras and is as helped me discover the fun in B&W photography. For more monochrome coastal images and some more thoughts around it continue reading after the jump…. END_OF_DOCUMENT_TOKEN_TO_BE_REPLACED

I need to do my Oregonian friends justice. They say there is sunshine in the PNW. And they are right. Here is the proof! This evening I returned from a 12 day trip to Portland. There was one truly beautiful day with sunshine throughout during these 12 days, which was last Friday. This was also when I took this photo of Mount Hood on my way from the office to the hotel.  It rained all other days.

But the weather forecast for the weekend and the coming week calls for warm and fair weather in Rose City. Everybody should enjoy it. Because maybe I’m the one bringing (for sure unintentionally) all that rain. And I will be back the week after next ;-). But meanwhile I will enjoy time with the family and on the Streets of Nuremberg.

Wish everyone a great weekend a sunny trip into May!

On the Streets of Portland again

This week’s Weekly Photo Challenge has the title “wanderlust”.  It is the perfect theme to show you another photo from my trip to the Oregon coast this past weekend.

I took this image at Cannon Beach, where the late afternoon sun used a short break between showers to backlight the trees on the cliffs at the northern end of this magnificent mile long sandy beach at the shores of the grand Pacific Ocean.

I’ve been privileged to have been at the Pacific many times before, but never this far north. The moment felt special, the beauty of this moment where I saw the glow of the sun on the wet sand of this magnificent beach, the cliffs and the tree providing a perfect backdrop. The sound of the waves, the spray of salty air on my face. It felt great, I felt wanderlust throughout. I felt blessed that despite all the hard times that the job that pays the bills demands of my family and myself, it still gives me the opportunity to occasionally explore places I haven’t seen before and that I might never have seen otherwise.

Inspired by some photos I took during last weekend’s trips around beautiful Oregon I found it is time for another “Instant Inspirations” post. This is my series for you if you feel you suffer from “Photographer’s Block”  or simply want to shoot something that you have never tried. Or at least not recently. With Episode 15  I want to inspire you to go out and shoot long exposure waterscapes. For the how-to, more images and links to all previous editions of “Instant Inspirations” continue reading after the jump…. END_OF_DOCUMENT_TOKEN_TO_BE_REPLACED

Yesterday I did a nice tour from Portland, driving up along the Columbia River to Astoria where the mighty river flows into the Pacific, then down the coast to Cannon Beach and finally back to PDX. All in all I was 14 hours on the road. The weather was very oregonic, starting with pouring rain along the river, turning to a sun / show mix on the coast and eventually finishing in a nice sunset. I will need to hit the digital darkroom over the next days to look through my images, but I’ll show you a first photo from the mouth of the Columbia River, where a mighty, 4.1 mile long bridge takes Route 101 across and connects Astoria in Oregon with Megler in Washington State. It opened in 1966. The south part has a 200 ft clearance so oceangoing ships can pass on their way to the upstream harbors of Portland and Vancouver.

I took this long exposure image from the Cannery Pier just west of it. To smooth out the water and clouds I dialed in a 13 second shutter speed, closed aperture down to f/20 and used the lowest ISO of my PEN-F. To avoid overexposure I had attached my Haida ND3.0 neutral density filter, essentially a piece of darkened glass that reduces the amount of light hitting the sensor by 10 stops, the only way to achieve these long shutter speeds in bright daylight. The camera was mounted on a tripod and I used the Haida ND3.0 filter.

I converted the RAW file to monochrome in Lightroom CC, using a monochrome preset as a starting point and then mainly adjusting the gradation curves.

You will get to see more of this trip in the next days. Today will be all rain and I haven’t decided if I drive up to the Columbia Gorge to see the waterfalls.

Wish you all a great Sunday!

I successfully made it through the week and am now looking forward to a weekend in the Pacific Northwest. After work I drove into downtown for some later afternoon and blue hour shooting. Still fighting some jet lag after arriving in Portland two days ago  I’m much too tired to post process my photos, but after a quick scan I send all of us into a well deserved weekend with a photo I took on the famous Steel Bridge that crosses the Willamette River and provides great views across the river towards Broadway-and Fremont Bridges in the upcoming dusk.

Tomorrow I head out to the Oregon Shores of the Pacific Ocean. I’m so much looking forward to it!

On the Streets of Portland again

To honor the upcoming Earth Day, this week’s Weekly Photo Challenge bears the title “Earth” to celebrate this planet on which we live.

For me, the ethereal atmosphere in Antelope Canyon perfectly symbolizes the beauty and perseverance of nature. The powerful flow of water once carved out these slot canyons in the barren landscape of Utah over the course of thousands of years, and the sun shining into the narrow canyon has created the magic beams of light in the past and will continue to do so for all future. Let’s all join in protecting the magic of our planet earth.

Today I want to share this portrait out of my archives, again from the Streets of Chennai, India. The lady just had treated herself to a coconut to quench her thirst on this very hot and humid afternoon. Beats a Coke, doesn’t it?

Tomorrow at 4:15 am my taxi will pick me up for the 30 minute trip to the airport. Then it’s off to Portland via Amsterdam. Looks like I trade the Nuremberg snow for the Portland rain. Right now I’d take Chennai over both 😉

To pay or not to pay, that is the question

Time for another of my Street Photography Quick Tips. One of those short, easy to read and easy to use tips that I think could help you while shooting in the streets. Today’s post is about capturing gesture. Don’t just capture people walking with arms hanging at their sides or with expressionless faces. Gestures can convey strong emotions in your photographs. If you want to find out more, continue reading after the jump…

END_OF_DOCUMENT_TOKEN_TO_BE_REPLACED

Easter is upon us. Finally time to relax. We are visiting friends in Zurich. The weather is rather portlandish 😉  So enough time for a second Sunday Haiku 🙂 ! We plan to visit the Swiss Photo Awards Exhibition in the afternoon, I’m really looking forward to it.

The morning show belonged to kitten Bruno. He was not at all into all the hidden chocolate eggs, but the plushie bunny came just right.

You all have a great Easter Sunday!

It is Good Friday. For many this day is the start to a long Easter Weekend. Time for relaxation, time to spend with families and friends. For many this is a day to celebrate and live their faith.

To this day I never felt the intensity of a Good Friday more than back in 2002 when we spent Easter in Sicily and watched the Good Friday procession in the Old Town of Trapani.

Whatever you do and wherever you are, I wish you a peaceful, blessed and happy Easter! 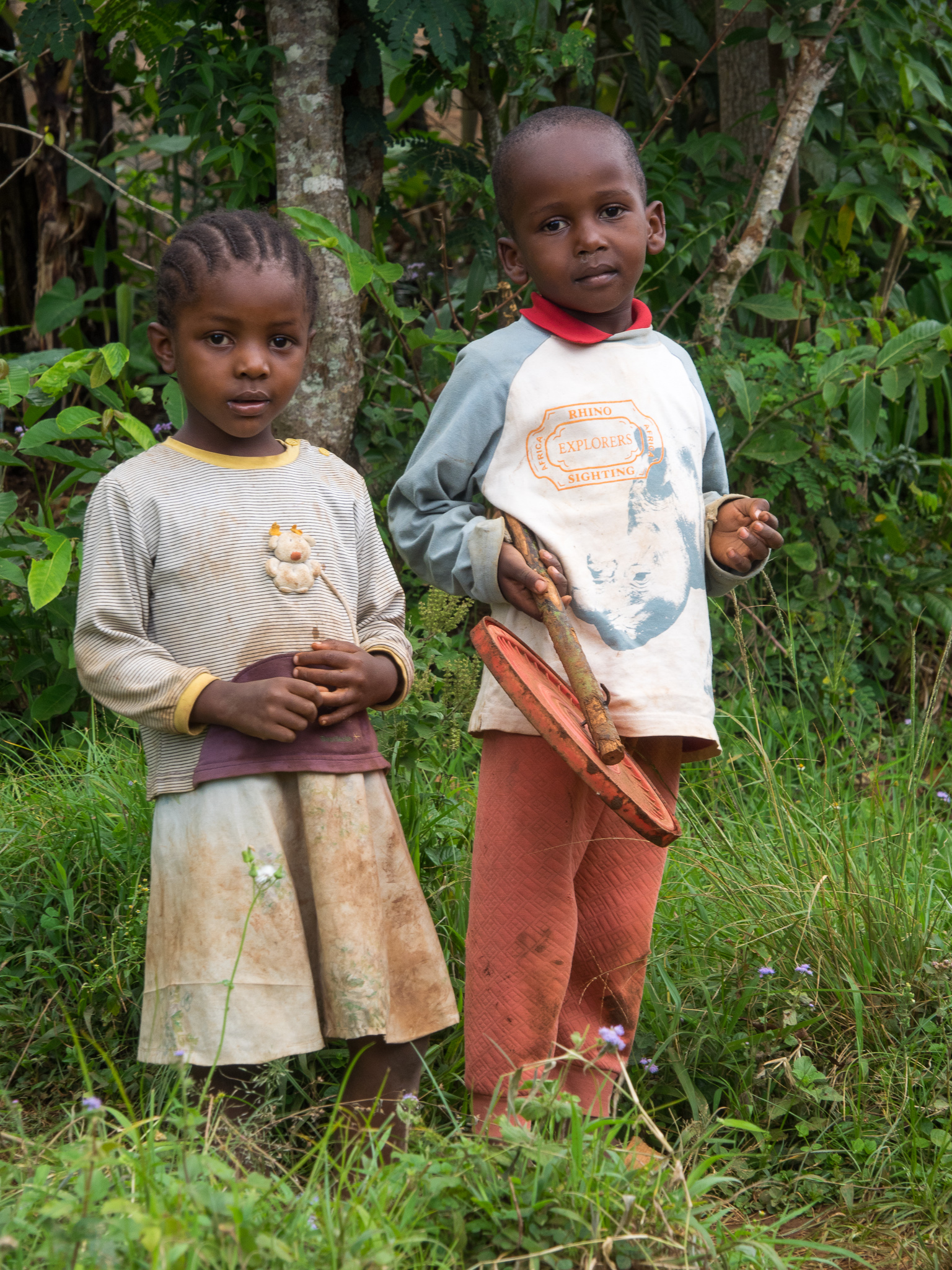 Frequent readers probably know by now that I try to meet the Weekly Photo Challenge from Word Press’ “The Daily Post” with one of my Street Photos. This week’s challenge has the theme “Surprise”.

While visiting Tanzania last year (a trip organized by our local church parish), on one of our tours out of Moshi (where we were based) we also visited the little town of Muikwa on the slopes of Mt. Kilimanjaro where we took a stroll on a small path through lush vegetation and little coffee and banana farms left and right the way. And in this very remote (touristically speaking) area all of a sudden a wild and laughing group of young kids in school uniforms came downhill towards us.

Based on their “surprised” reaction I assume they never before saw or could have expected a group of foreign visitors wandering up the small path through their settlement. 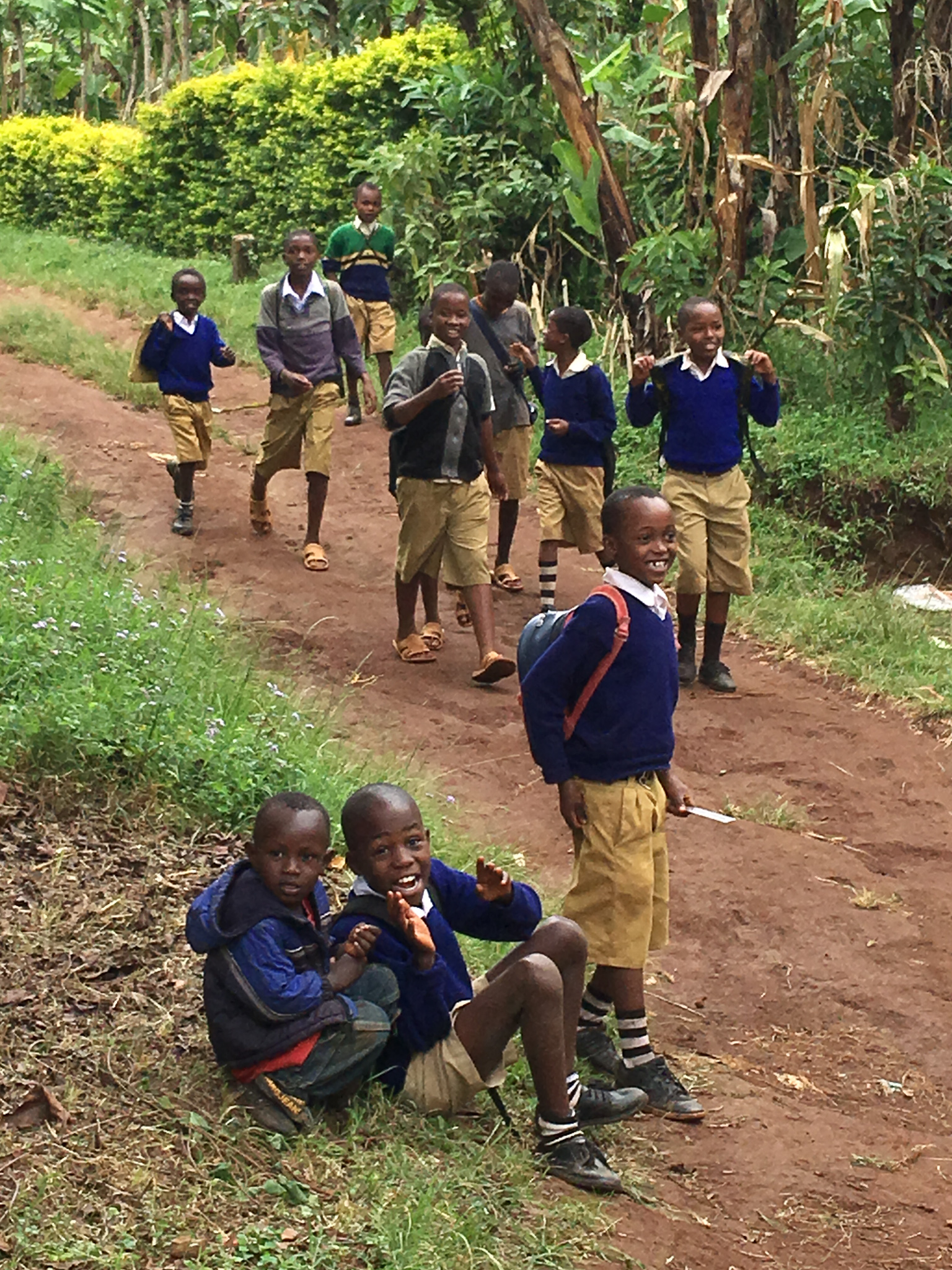 Communication obviously was limited to smiles and waving hands and their curious looks in the display of my camera that got them really exited. While the little students disappeared into the settlements left and right of the path we continued a bit uphill were we eventually found their school, the Maremi Primary School. I did a post about this school early into my blogging and you can find it here.

I hope you like my interpretation of the challenge.

I wish all of you some happy, relaxed and peaceful Easter days!!