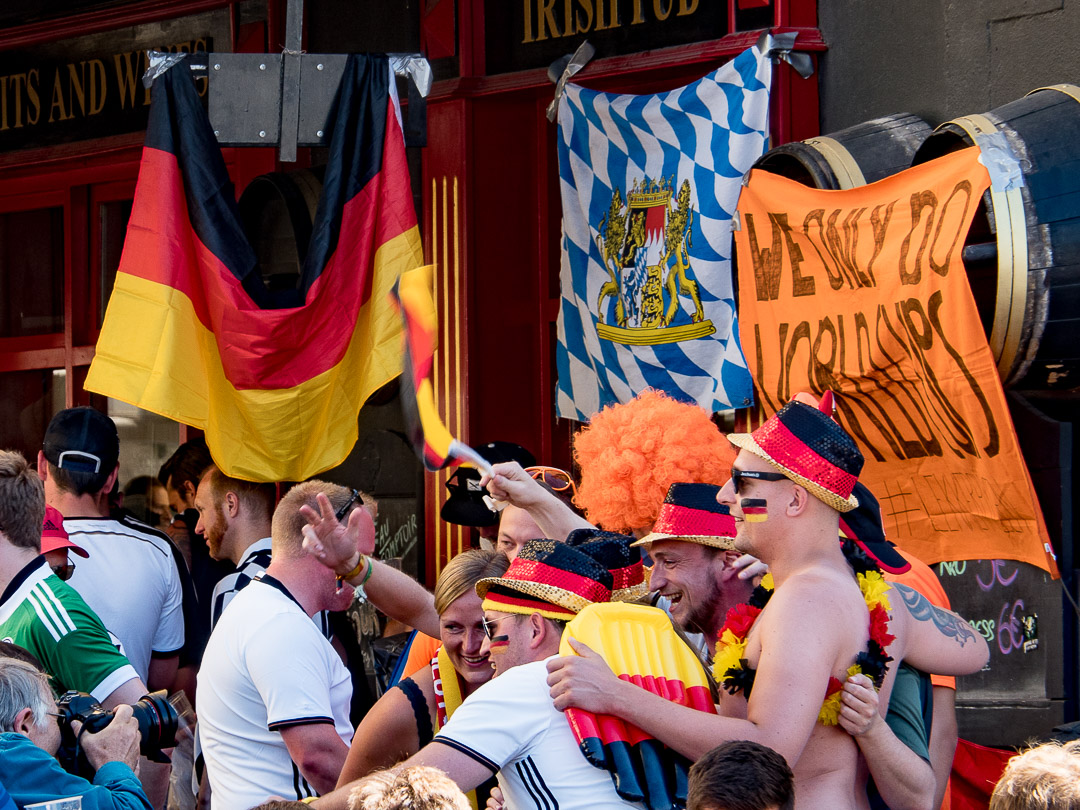 Finally the World Cup fever is properly settling in. I was in the kitchen all morning preparing food for a big soccer party with our neighbors this afternoon when Germany takes on Mexiko in their quest to defend the Cup. The weather is fine, so we’ll watch together in our driveway on the big screen. Plenty of food and drinks and hopefully a good match. Let the games truly begin…. END_OF_DOCUMENT_TOKEN_TO_BE_REPLACED

The World Cup has kicked off in Russia. Soccer is the national sport of Germany, and 80 Million head coaches are trying to figure out the best starting lineup for the first match of the defending World Champion on Sunday versus Mexico.

As I write this I’m sitting on my couch and watch the match of tournament favorite France playing the Soccaroos from Australia. Amazingly, they are tied at 1:1 going into the last 15 minutes…. END_OF_DOCUMENT_TOKEN_TO_BE_REPLACED

In less than 72 hours the FIFA World Cup will be upon us. Strangely, here in Germany it is still pretty quiet around the Nation’s favorite sports team, and we are far away from the euphoric mood that rocked our country four years ago and that culminated in one huge party when Germany won the final against Argentina for our fourth World Title. Maybe it has to do with the meager results in the test matches leading up to the tournament. Maybe it has to do with the host country Russia, which is not really known as a soccer nation. I myself am rather bearish on our chances for defending the cup.

But at least we have a chance, as opposed to the US team that didn’t even make it through the qualifiers. Maybe players like this highly skilled soccer dad would have helped the Team USA to make the tournament. His dedication for the ball and the fun he had with his kids was contagious. Eleven guys like him would make for a formidable squad, I’m very sure.

Photographically I worked the scene a bit with this guy. In the first image I intentionally used the unsharp faces of the kids enjoying their ice cream to frame the soccer player as they passed directly in front of my lens, shooting at the long end of my 12-100mm F/4 zoom. This creative composition element created depth in the image, served as a frame for the main subject and also provided a juxtaposition between savoring food and doing sports. My other photos from the scene you can find after the jump… END_OF_DOCUMENT_TOKEN_TO_BE_REPLACED

July is upon us and with it the time for glorious, fiery summer sunsets. In the colors black, red and gold. The colors of the German flag.

And the start of July treated us German soccer fans to two international titles. First the Under 21 national squad won the European title by defeating Spain 1:0 in the finals. And tonight our National Team won the Confederations Cup in St. Petersburg with a 1:0 win over Chile. And this with a B-squad, as the key players from the 2014 World Cup Winner were given the summer off to get the needed rest before the pending start of the new European soccer season that will be capped with the World Cup 2018 in Russia next summer.

The two victories give is plenty hope we can defend our title next summer.

Image specs are 1/3200 sec @ f/7,1 and ISO 400. The short exposure time ensure the rendering of the landscape as a black silhouette.

Have a great July!