Before Travel Day (to Portland) comes Match Day (in Munich). A very good friend got us tickets to the Bundesliga soccer match between FC Bayern München and Schalke 04 in Munich’s Allianz Arena. This awesome, sci-fi like stadium is just a 70 minute drive south from our house. To see some more street photography around the match and more impressions from the stunning arena, continue after the jump…. END_OF_DOCUMENT_TOKEN_TO_BE_REPLACED

Football is back! Last night, and most Sunday nights (consider the time difference, the early games will start 7pm our time) in the next couple of months, Big Boy and myself will enjoy father-son game nights. The setup is as follows: On our big flat screen TV we’ll have the game of the week broadcasted by  a German television station. On Big Boys laptop he’ll be streaming the 49ers game (his team since he likes football) of the weekend or the Red Zone Channel if they play at another kickoff time. On my MacBook I’ll be streaming the Dolphins game (my team for 34 years) or any other that I find interesting. So we watch three early games in parallel and then three late games. On our smartphones we keep track of the fantasy football stats, as Big Boy runs his own fantasy football league with some friends and his old man. Call us crazy 😉

These photos I took during my last visit to an NFL games, when I saw the Patriots play the Cowboys at AT&T Stadium in Dallas in 2015. But the three year drought of  love football will come to an end in just in less than two weeks, when I will see the Dallas Cowboys again, this time visiting Lincoln Financial Field and the Seattle Seahawks. I can’t wait for the game in this iconic stadium. So bright times are ahead.

I just need to figure out which camera to take to the game. The NFL (as the NBA) has become quite restrictive about bringing cameras with interchangeable lenses into a stadium. I nearly got turned away with my PEN-F when visiting a Portland Trailblazers game earlier this year. It took me quite some talking and pulling off the “I’m a tourist – I didn’t know – you can’t send me away – don’t have a place to put the camera” number to finally get admitted.  So I think I will bring the old Panasonic TZ-61 from The Significant Other (that she put aside for good in favor of doing only iPhoneography), it’s got a 30x optical zoom with 720mm full frame equivalent. Image quality is not on a level with my m43 system, but it will have to do. The results will be posted here after the game on September 23rd, so check back if you are interested.

What I admire about US sport in general that fans from both teams mix and mingle without getting into fights (something that is seemingly impossible in European Soccer) and sharing the love for the game. I love the atmosphere around NFL games with the tailgating parties before and after the game around the stadium. I wish we had this here in Europe.

Oh and by the way, my Miami Dolphins, notoriously success less in the past 30 years, won their opener. Due to two lightning delays of two hours each it turned out to be the longest NFL game ever played. It started at 7pm my time, and finished at 2:10 am in the morning. It was a short night 😉

Wish you a great week!

His last match – and how I captured it

Strolling around the Rose Quarter, a sports and entertainment district located east of downtown Portland on the banks of the Willamette River, I saw a couple of Hockey Fans waiting in front of the Memorial Coliseum. This couple caught my eyes, so I walked up to them and asked them what game they are waiting for, as Portland doesn’t have a NHL team. So they educated me about the Western Hockey League, where hockey is played by young athletes between 16 and 20 years old. The league consists of  teams coming from Canada and and the Northwestern US. The Portland based team is called the Winterhawks.

Joan and Ron told me they like the passion with what the kids play the games, that it is a very laid back atmosphere at the games that, obviously, are much more affordable to watch than the high profile NHL games.

And after a very nice conversation they happily posed for a portrait.

Today is my last workday in the Rose City, tomorrow morning I head back home via Seattle and Amsterdam. Can’t wait!

If you want to pic up your camera and are looking for tips and inspirations around photography, be sure to check out my free Learning Center.

Looking forward to the weekend 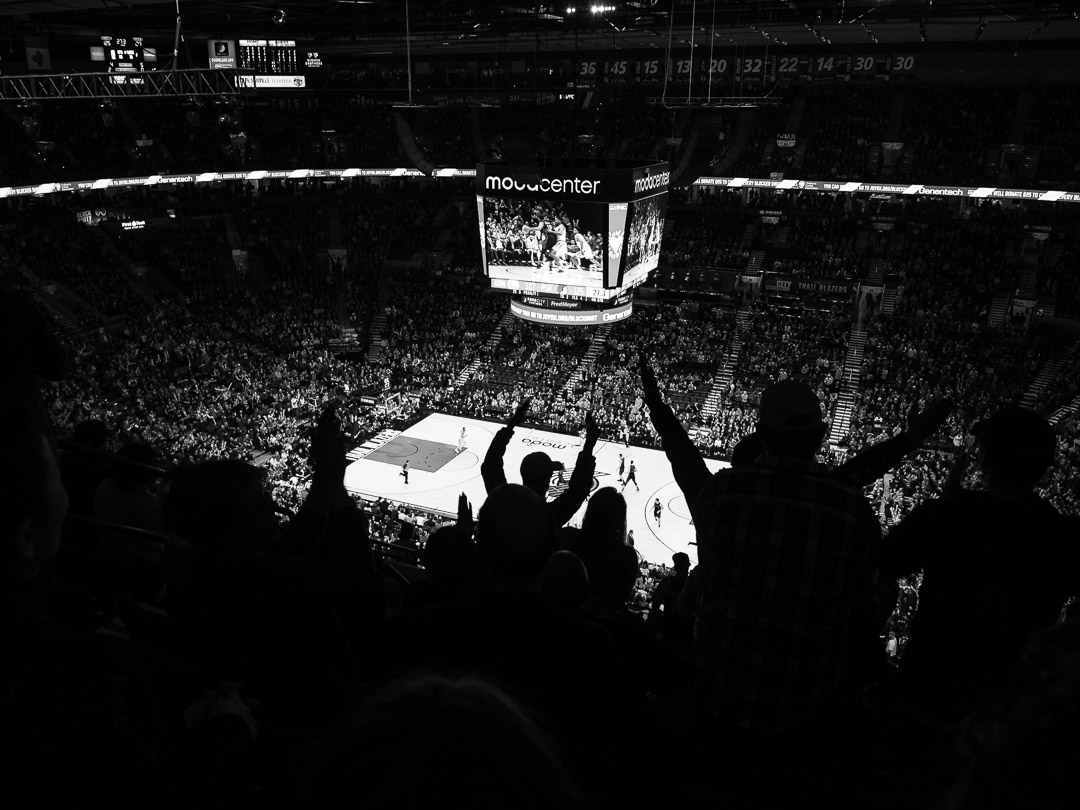 After flying into Portland on Tuesday and four intense work days, I finally got off Friday night and treated myself to something special, visiting my first ever professional basketball game. The opportunity was too good to pass up, as defending NBA champion Golden State Warriors came to town to take on Portland’s Trail Blazers, both currently in second and third place in the Western Conference. For my photographs of this memorable evening and some in game experience continue after the jump…. END_OF_DOCUMENT_TOKEN_TO_BE_REPLACED

Everybody has a bucket list. And to have those goals to see or do things before you call it a day once and for all is what drives you forward in life. And my bucket list is long, definitely too ambitious for my remaining life time. But yesterday I managed to cross out not one, but two of those items I always wanted to do: I skied on a volcano, and I skied in North America.  Why those two items were on my bucket list? To find out and to see the photographs of my magnificent Sunday in the Pacific Northwest continue reading after the jump…

END_OF_DOCUMENT_TOKEN_TO_BE_REPLACED

Super Sunday is here. Super Bowl LI is upon us. The Atlanta Falcons take on the New England Patriots. Since my days as exchange student in the USA in 1984-85 I’m an American Football enthusiast. Since then I have watched every single Super Bowl live on TV, even when here in Germany the game is on in the middle of the night. Not to mention that during NFL season usually my Sunday evenings are full of football as well. So you can call me a hardcore fan of this game. I rather not mention that since my exchange year my heart belongs to a team that has been notoriously success less  in the past twenty years, even though in this year they showed some signs of life again. I hope I live to see them reach the big game once more.

To see more monochrome photos of one of my live football experiences and read about some  of my thoughts about the game continue reading after the jump…..