Everybody has a bucket list. And to have those goals to see or do things before you call it a day once and for all is what drives you forward in life. And my bucket list is long, definitely too ambitious for my remaining life time. But yesterday I managed to cross out not one, but two of those items I always wanted to do: I skied on a volcano, and I skied in North America.  Why those two items were on my bucket list? To find out and to see the photographs of my magnificent Sunday in the Pacific Northwest continue reading after the jump… 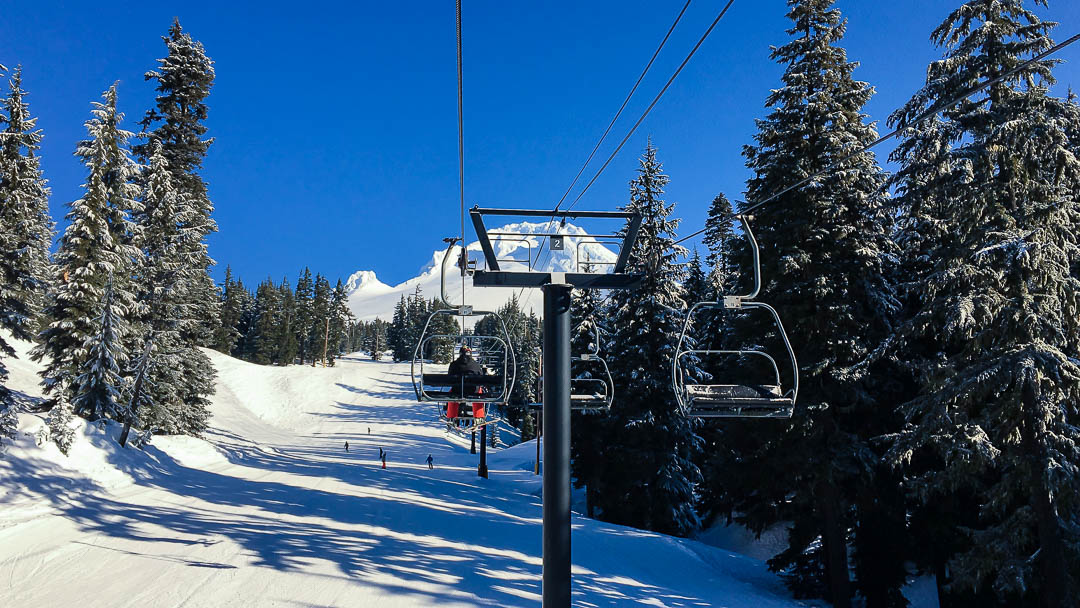 When I took my significant other to Hawaii on our honeymoon trip some 25 years ago I was fascinated by the aspect that one could actually ski down a veritable volcano, Mauna Kea in this case. To be on those even slopes with completely unobstructed views across the surrounding landscape, plus the fact you ride on a real volcano  was something I really wanted to experience. Then in Europe everybody who skies talks about that unreal snow that you can find on the mountains in North America. The legend says that the dry air in the high altitudes produces a natural snow that is far superior to the mostly artificial snow that you can find on the slopes in Europe. So every skier on our side of the pond dreams to once experience the likes of Aspen, Vail and Whistler, to find out if the snow is really so much better than the one in Europe. 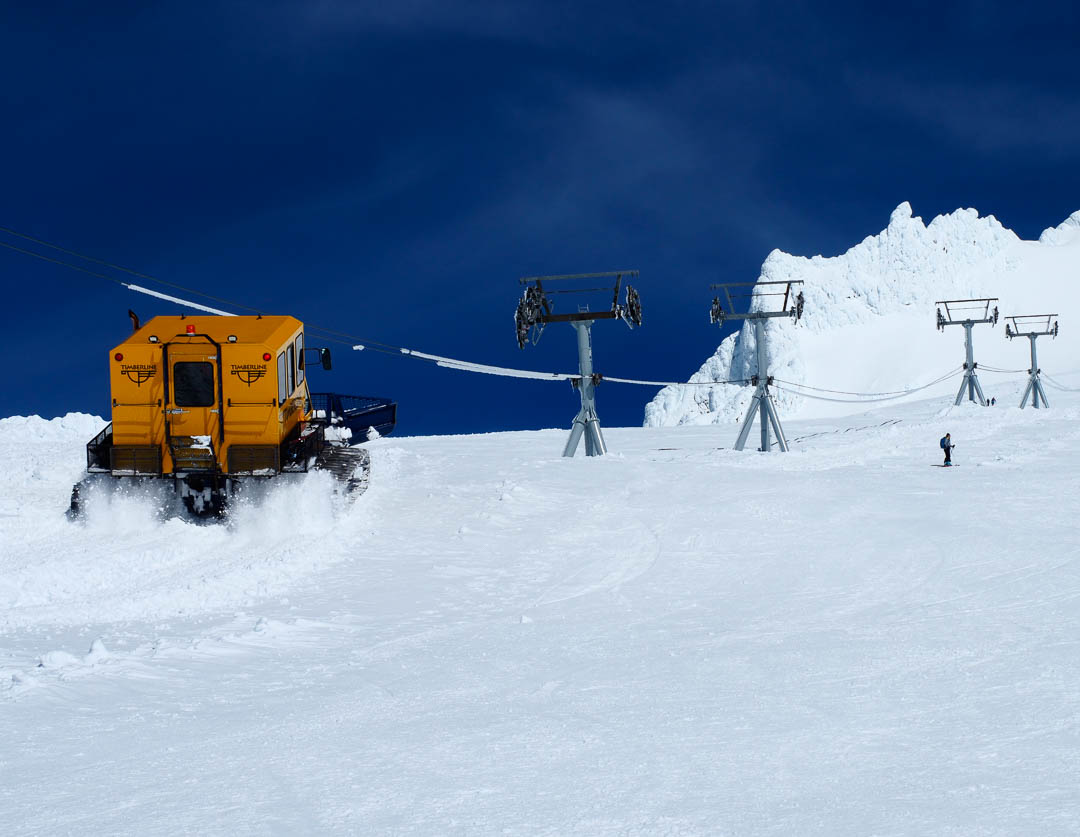 So spending the weekend (having to spend the weekend would really be the wrong thing to say) in Portland I grabbed the first opportunity of a free day with beautiful weather to drive the 60 miles to Mount Hood to get the two things off my bucket list. I left PDX at 6:45 in the morning, arrived at the Timberline Ski Area 90 minutes later and was on the slopes with rented skiing gear at 9am when the lifts opened. 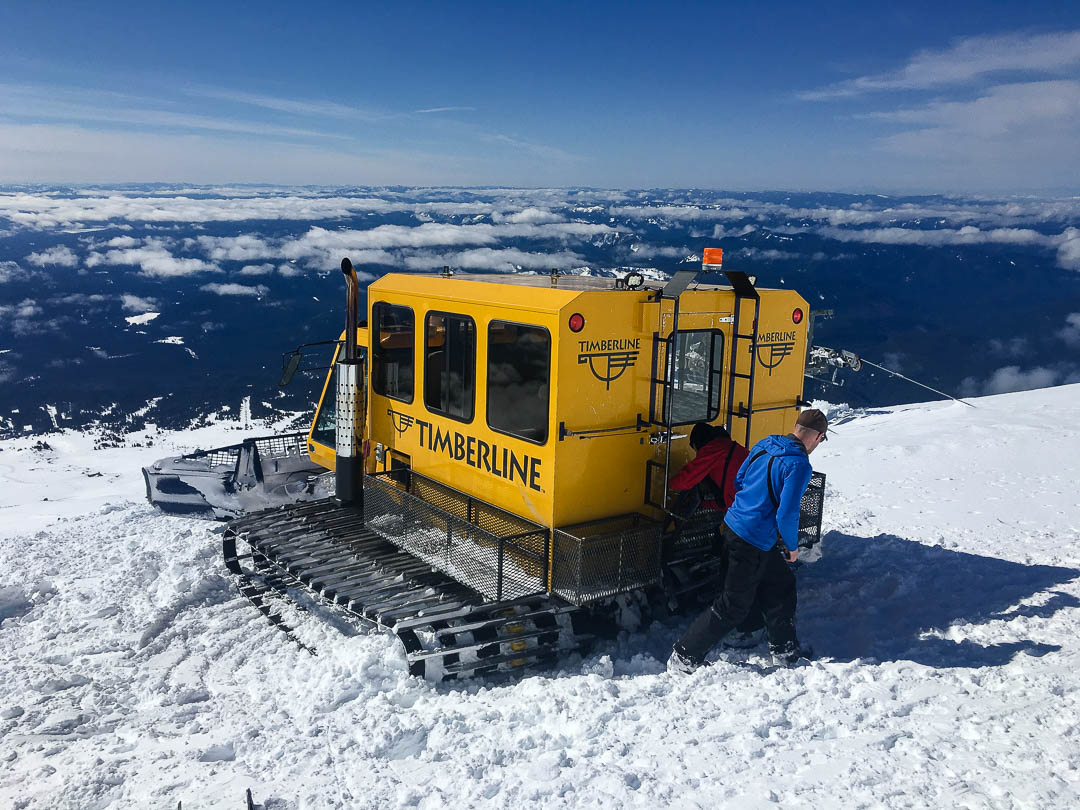 My expectations were not disappointed, to say the least. I never had a better skiing experience in my life. The highlight was to take the snowcat up to the Palmer upper lift terminal at 8500 feet altitude. The lift doesn’t run in winter as it is simply buried in too much snow, the snow depth on Palmer glacier reaching 50 (fifty!) feet, so going up with the snowcat is the only way to go. But what an experience, as you are directly below the summit area of Mount Hood (11,239 feet or 3,426 m). The view across Oregon on a clear day is one of a kind. The hosts from the ski area claimed you can see all the way down to Northern California. 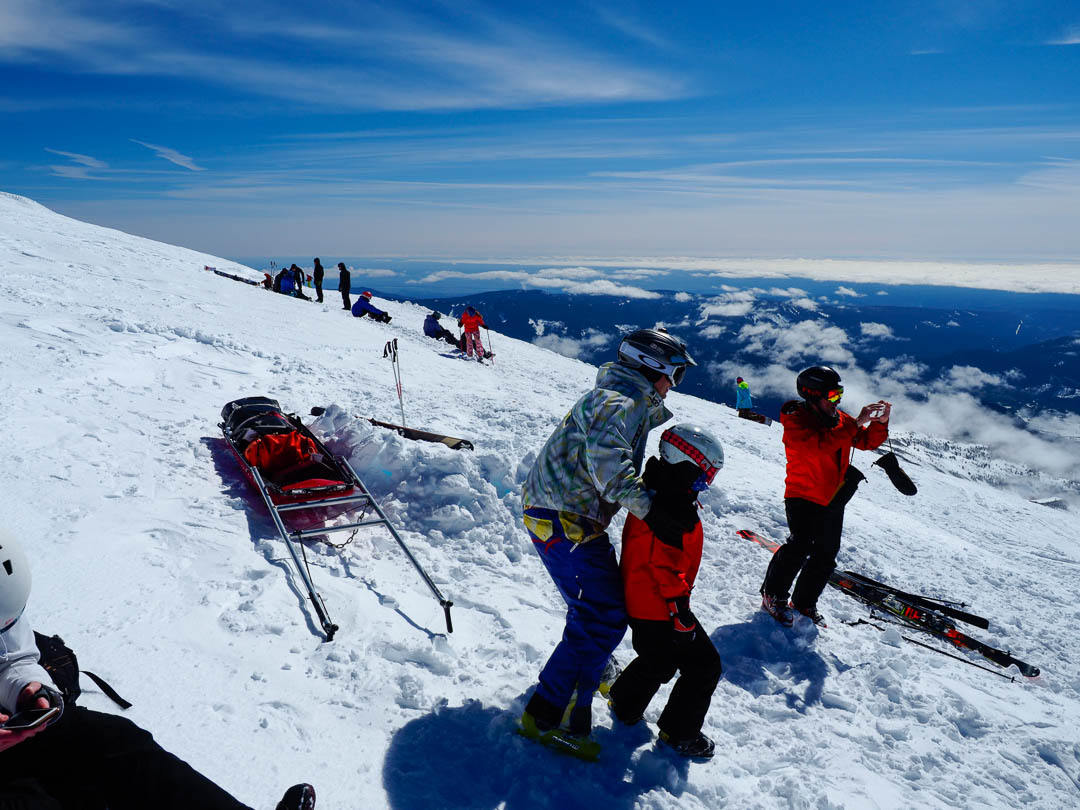 Taking the snowcat ensures you are actually one of very view people on this top run on Mount Hood. For me it was really an exhilarating experience, and the photos I took with my Olympus PEN-F with the mZuiko 12-40mm F/2.8 Pro Zoom can’t do the actual scenery any justice. 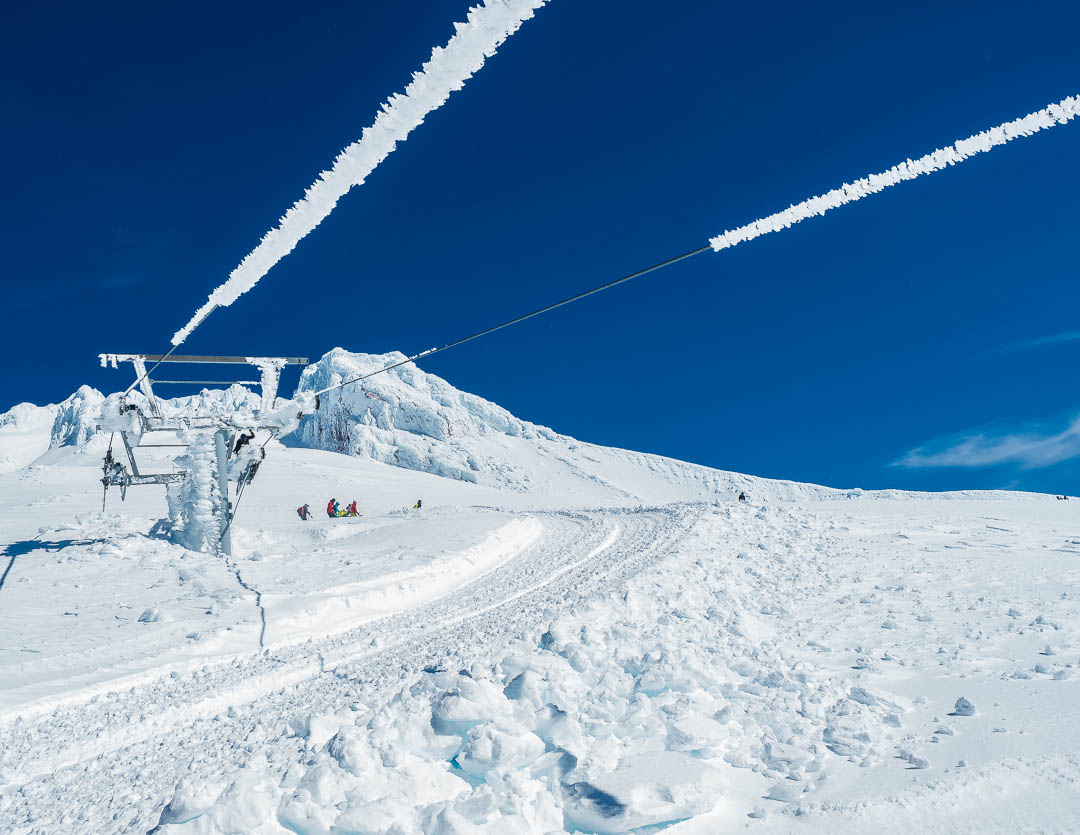 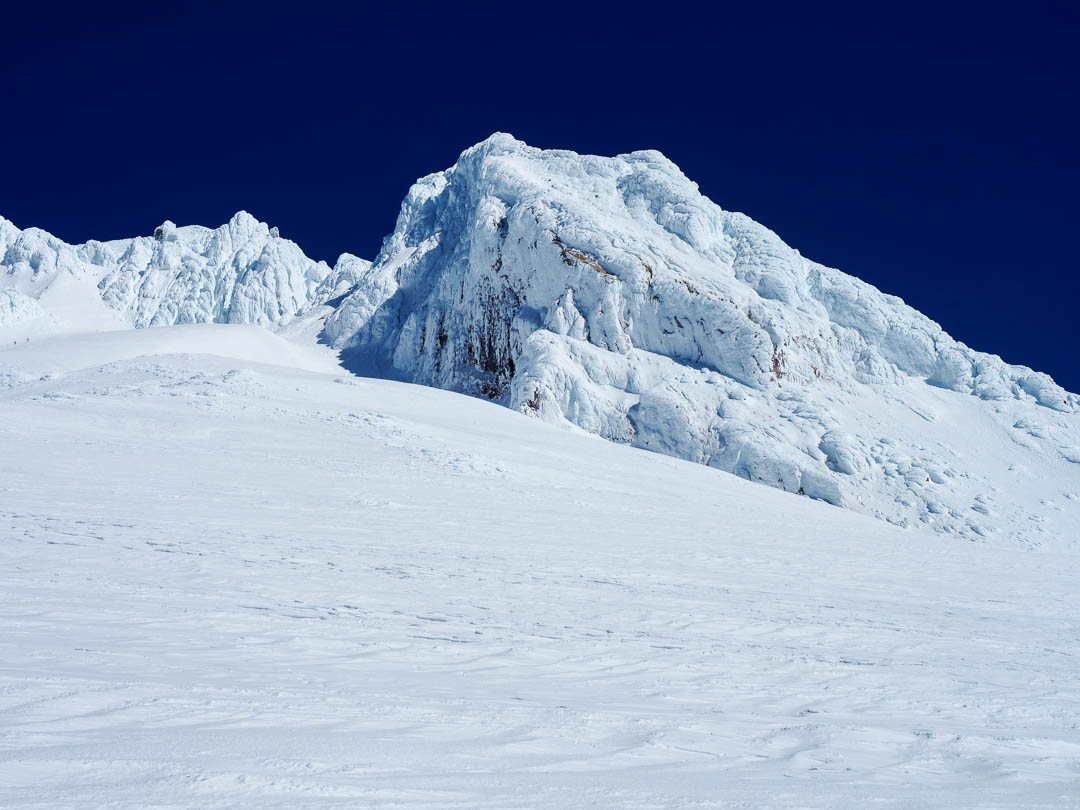 Besides the experience of skiing a volcano I was also treated with a splendid view of neighboring (some 46 miles away) Mount Jefferson (see next image), another of the Cascade’s great stratovolcanos. 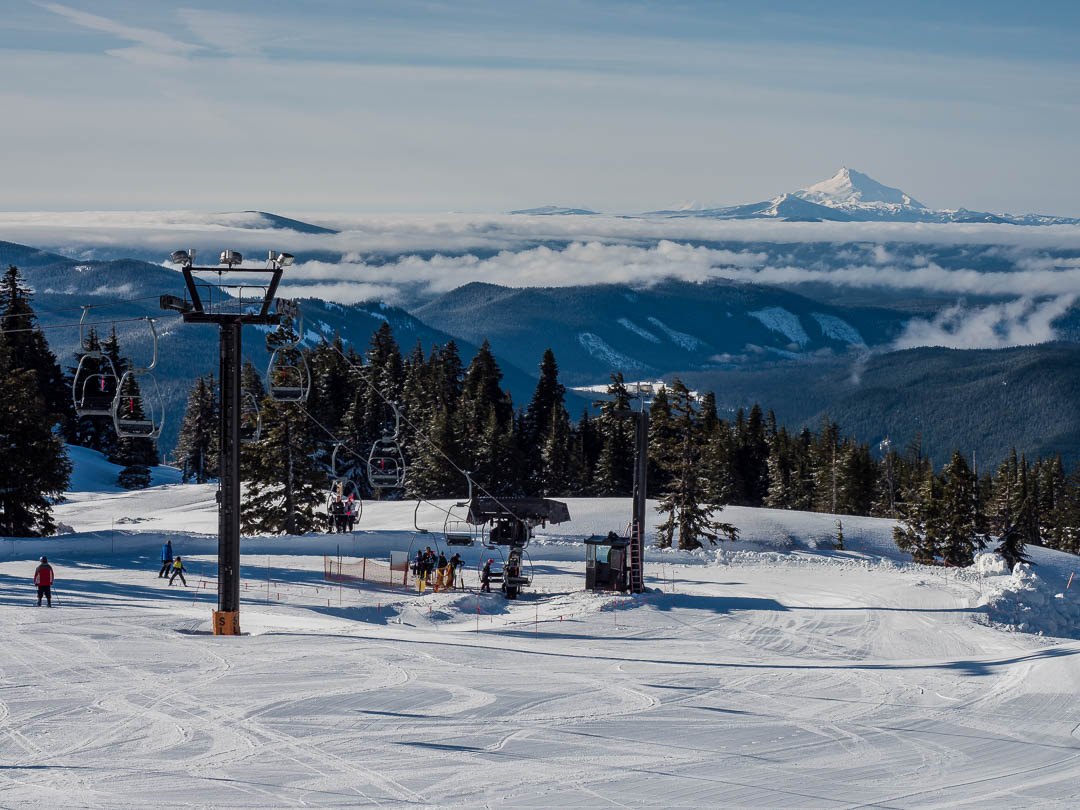 Starting point of my unforgettable skiing experience was the historic Timberline Lode, built in 1937 on the south slope of Mount Hood at an altitude of 6000 feet. 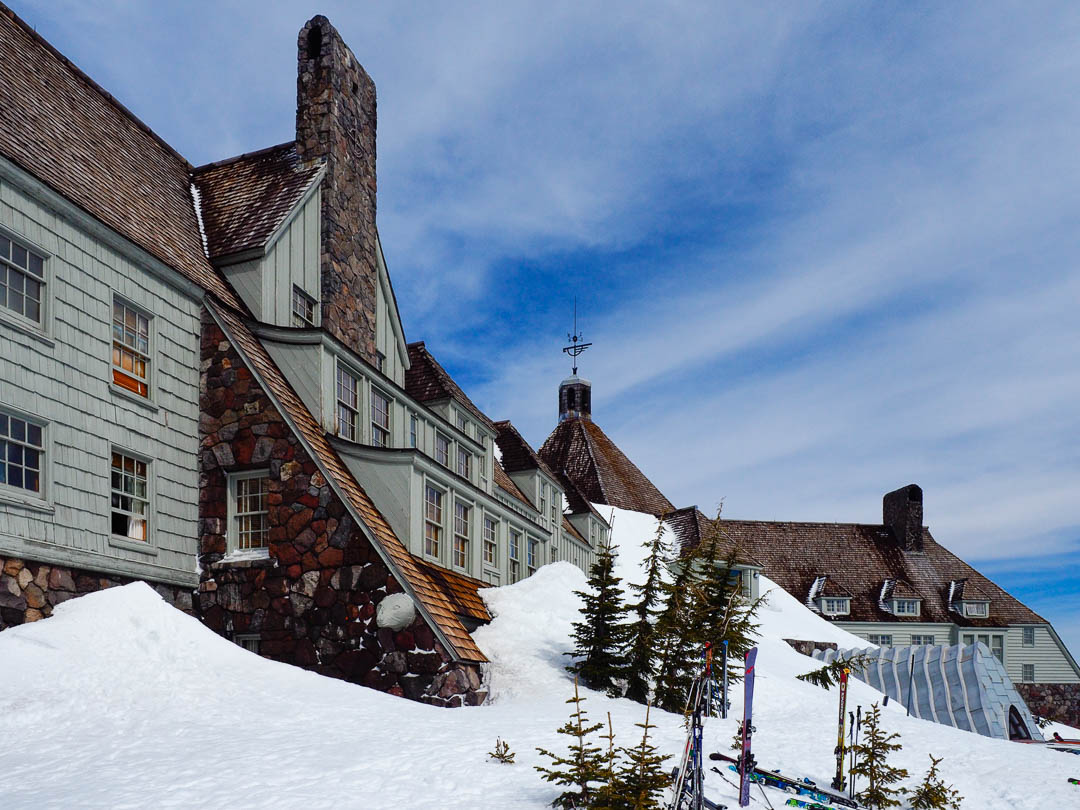 Seeing that impressive structure buried by all this snow was also quite impressive. Guests need to walks a sort of tunnel structure in winter to enter the building through all this snow. Returning to Portland after a great day of skiing took another 90 minutes. After being back in Rose City I went up to the Rose Garden to capture the view of majestic Mount Hood behind the Portland skyline, only to find two problems. Trees nearly completely block the view towards city and mountain behind. And the view point is to high with the mountain towering rather way above the buildings instead of being behind them. So following a tip I found on the web I drove a good mile to NW Maywood Drive which is a bit lower and, between the houses located there offers the beautiful view of city and mountain that I had hoped for to capture at the end of this great day in the Pacific Northwest.

And yes, the snow is far superior to what I ever experienced in while skiing in Europe! And that you don’t get a wrong impression, this was honestly the first sunny day in my last twenty days I’ve spent in Portland, where it was only raining. And it is raining today again…. 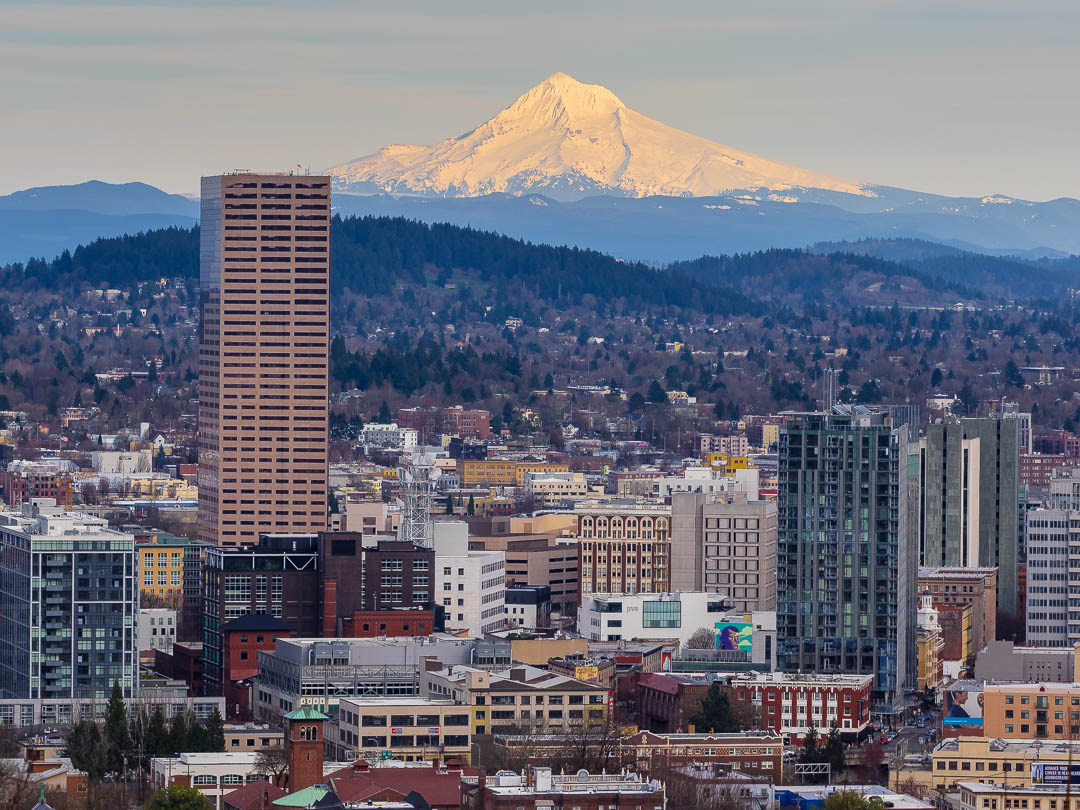 Thanks for reading and coming along on my memorable skiing trip to Mount Hood. Sometimes there is a good side to business trips and the time away from family and home after all. But it is sour earned and the exception.

38 thoughts on “Ski the Volcano”