This post is the 3rd and final episode with my photos from the Instawalk at Nuremberg’s Albrecht Dürer Airport (NUE), organized by the admins of the Nuremberg Instagram community @igers_nuernberg (in case you missed it, you can read the first two posts here and here). The walk, authorized by the Airport, gave 15 Instagramers the possibility to tour the car parks of the airport with cameras and tripods. The group was led by two admins and and a photographer from the airport staff. To check out the rest of my images continue after the jump…. END_OF_DOCUMENT_TOKEN_TO_BE_REPLACED

Just in case you wonder if you missed the last 5553 posts about Friday night’s Instawalk at Nuremberg’s Albrecht Dürer Airport (NUE), don’t worry, there was only episode 1 I posted yesterday. But I decided on the special numbering to celebrate 5555 followers for this blog. This morning, the “Streets of Nuremberg” passed the mark that I wouldn’t even remotely have considered reaching one day. Thanks to everyone regularly reading about my photographic musings, this is so much appreciated.

So this is the second post with some shots I took during the walk with 15 fellow Nuremberg Instagramers trough the airport’s car parks, organized by the admins  @igers_nuernberg  and properly authorized by the Airport press department. While yesterday’s post was mainly black&white photos, you find more color images after the jump…. END_OF_DOCUMENT_TOKEN_TO_BE_REPLACED

And at least I got to do some shooting in my favorite airport tunnel. For more photos continue after the jump… END_OF_DOCUMENT_TOKEN_TO_BE_REPLACED

Here are some more variations from the passenger tunnel between concourses B and C of Chicago O Hare’s Terminal 1. I took the photos while connecting through ORD last week. They show a different view of the tunnel than the photos I showed in my post “Travel Day (13)“. A good example how you can play with your camera, working the scene with different creative approaches. For three more images continue after the jump…

END_OF_DOCUMENT_TOKEN_TO_BE_REPLACED

Travel Day once again, but this one is special. To find out why, continue after the jump… END_OF_DOCUMENT_TOKEN_TO_BE_REPLACED

After a five-week stint at home it was back to business traveling today, taking my (usual) 6am flight from Nuremberg to Amsterdam and on to Portland for two weeks of project work in the Pacific Northwest. The five-week flying hiatus meant finally a new meal menu and also a bunch of new movies to watch.

During the early morning approach to Amsterdam Schiphol I took some aerials of the frozen coastal area of the Netherlands. And connecting through AMS airport I used the opportunity for some quick street (or rather airport) shooting. For all the photos continue after the jump…

END_OF_DOCUMENT_TOKEN_TO_BE_REPLACED

My first business travel of 2018 took me once more from Nuremberg via Amsterdam and Seattle to Portland, Oregon, where I arrived in surprisingly warm and dry weather after 19 hours total travel time at 2pm in the afternoon. For the airport I went straight to the office for an afternoon of meetings, before I collapsed in my hotel bed at 8pm in the evening and logged 8 hours of sleep before waking up at 4am this morning, a surprisingly long night considering the jet lag effects. To sum it up, back to business as usual for the job that pays the bills.

While connecting through Amsterdam Schiphol I saw a lady taking shots of the famous video screen clock in the international terminal area between the D and E gates. As during previous visits to AMS I myself have taken quite a few shots of the man inside the clock drawing, erasing and re-drawing the hands, I took my Ricoh Gr II I brought along as camera on this trip and shot this monochrome photo of a fascinated fellow traveler.

After the jump you find my original color shot of the video clock, a few photos of passengers on the walkway between B and C gates before I finish off with the high contrast monochrome landscape photo of a “broken mountain” that I took with my iPhone from the window of my Alaska Airlines Dash-8 on yesterday’s last leg from Seattle to Portland…. END_OF_DOCUMENT_TOKEN_TO_BE_REPLACED

Yesterday I visited the Oregon International Airshow at Hillsboro Airport near Portland. As an airplane nut and former certified pilot I just had to take the opportunity once I found out the event was on during my free weekend in the Pacific Northwest. And sure I wanted to take many photos, although being limited to my Olympus PEN-F and my mZuiko 14-150mm F4-5.6 Travel Zoom. To visit the Air Show with me and for some aviation photography tips continue after the jump…

END_OF_DOCUMENT_TOKEN_TO_BE_REPLACED 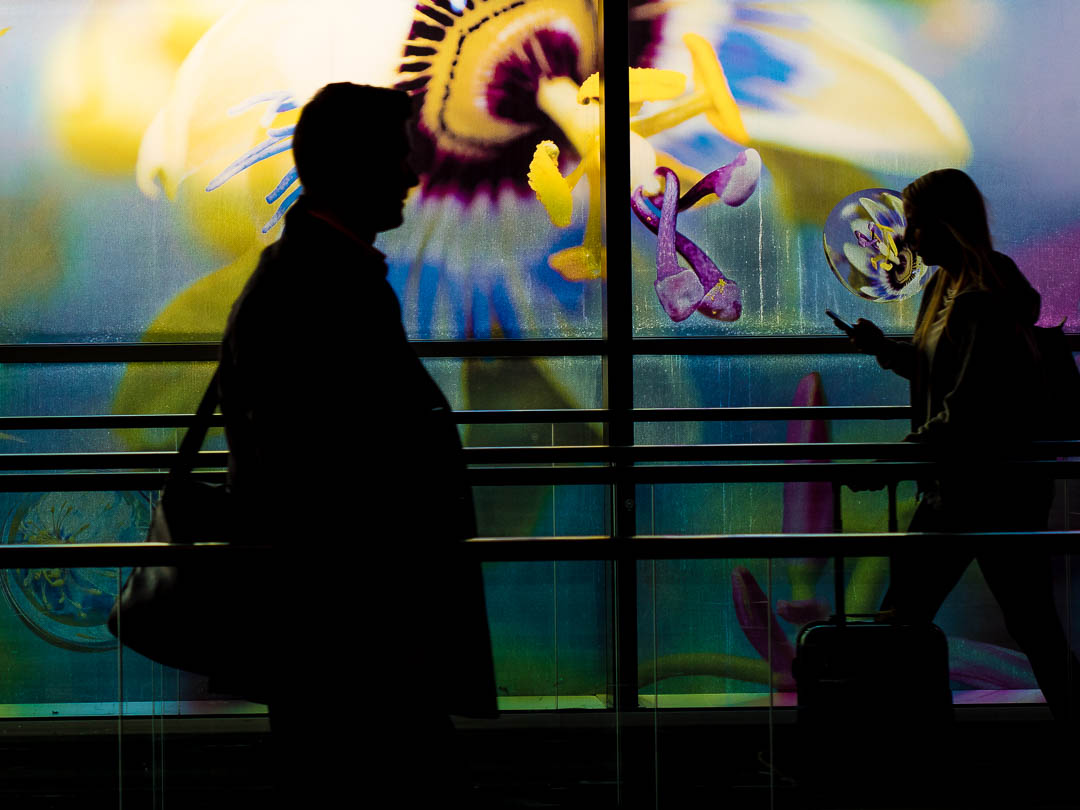 On the road again towards Portland. Well, I should rather say in the skies again, as I’m currently somewhere above Canada on my Delta flight from AMS to PDX. As usual I used the layover in Amsterdam’s Schiphol Airport for some Street Photography in the Terminal. To see what I captured during this connection continue reading after the jump…

END_OF_DOCUMENT_TOKEN_TO_BE_REPLACED

There is something classic, timeless, about this flight board in Terminal 2F of Paris’ Charles de Gaulle Airport (CDG). This is also where the last Concord flights departed. Although I’m currently sitting in CDG as I wait for the final flight home to Nuremberg I pulled this image from an earlier visit to Paris from the archives (when just transiting you don’t get there unless you want to exit the security area). Designed by architect Paul Andreu, Terminal 2 was constructed in the 1980’s and expanded in the early 1990’s.

This is another example of “the best camera is the one you have with you”…I took this photo with the iPhone 4s I had at that time. Just loved the elegance of this extraordinary flight board and its reflection on the shiny floor. I had to capture it and it had to be Black and White.

Enjoy the rest of the weekend!

My first international travel of the year at least brought the opportunity of doing some photography while connecting through Amsterdam’s Schiphol Airport, on my way to Portland, Oregon.  As you know from previous episodes of my series “Street? Airport!”, airports buzzing with travelers provide some awesome opportunities for some quick street shooting while passing through the terminals enroute to the gate. For another shot from this bar and some “bonus” aerial views from my Delta flight from AMS to PDX continue reading after the jump….

END_OF_DOCUMENT_TOKEN_TO_BE_REPLACED

Been travelling again this week with destination Brussels. It is a place where I was almost on a weekly basis during 2012-2013, always passing through the exact same area where on March 22nd 2016 terrorists killed 11 people and injured more than 100 in a suicide bombing that also heavily damaged the terminal.

It was a eerie feeling passing through the now reconstructed area and having the images of the bombings and the victims in mind, thinking about this terrible loss of life and fully conscious of the fact that on a different day it could have hit me.  I travel a lot, it comes with the job that pays the bills, and the first thing I always do after arrival is phone home and let my family know I’m ok.

In the brand new connector building between Piers B and A they put up the large red rocket that Belgium comic hero Tin Tin flew to the moon.