During last week’s stay in Udaipur I also took the opportunity to go for a 15 minute quick stroll through the old city center. Leaving the PEN-F in my bag in the office, I just took my iPhone 8plus along for the walk. Hoping to make some street portraits.

END_OF_DOCUMENT_TOKEN_TO_BE_REPLACED

I’m back in the air this morning, this travel day taking me once more from Nuremberg via Amsterdam to Portland, Oregon. The direct routing from Europe to the Pacific Northwest avoids weather induced travel delays while connecting through an eastern or central US airport. Fingers crosses, of course, but I’m leaving the sunny streets of Nuremberg for the, according to my iPhone weather app, equally sunny but even warmer Rose City. Not that I will get much out of it, as I’m staying only four and a half days and it will be all work (plus maybe a dinner or two).

END_OF_DOCUMENT_TOKEN_TO_BE_REPLACED

Ok, technically this is not a meteorite shower. It is an art installation called “Moving Mountains” by PNW artist Annette Bellamy. It is part of the special exhibition “the map is not the territory” in the Portland Art Museum. I took this indoor street photograph during last weekends visit to the museum that I used for some indoor street shooting.

But to me it looks like a meteorite shower. Or a snow- or hail shower. And this is exactly the kind of weather hitting many parts of the continental US today. Making for less than ideal travel conditions for my trip back to the Streets of Nuremberg. END_OF_DOCUMENT_TOKEN_TO_BE_REPLACED

Today it was finally travel day again, my first out-of-country business trip of the year. Just a one day trip from Nuremberg to Zurich. I left 5:15 to drive to the airport for the 7am flight to ZRH, needing the extra time due to the couple of inches of snow on the ground, as it had continued to snow throughout the night (last night I took camera and tripod to town for some awesome shooting of the snow-covered Old Town and the Imperial Castle – post coming up). For the rest of the photos and the days story continue after the jump….

END_OF_DOCUMENT_TOKEN_TO_BE_REPLACED

These days it is the job that pays the bills that prohibits me to pick up the camera and head into town. Especially now, that the gruesome weather of the past days has given way to calm winter weather.

But it is also the same job that comes with some benefits, like traveling to places around the globe. And while those business trips for the most part are limited to seeing airport, office and hotel, sometimes arises the opportunity to sneak away for an hour or two to catch some more touristic glimpses of those fascinating places. Especially, when you are willing to fight the jet lag and wander around a foreign city all by yourself late at night or very early in the morning. END_OF_DOCUMENT_TOKEN_TO_BE_REPLACED

Back home from yet another week in Portland. The week itself was uneventful and just work. But my flight back, unfortunately once more with my “favorite” airline United,  provided for another bad experience, just two weeks after my United disaster on my way to Memphis. This time all seemed perfect. Initially. Our Airbus A320 was perfectly on time, already out of the gate at PDX airport, when suddenly the captain came on and said we need to go back into the gate, as the aircraft was imbalanced due to improper loading, so they would need to unload bags from the back and put them into the front.

For sure I was happy the pilots found out while still on the ground, but then, fixing the screw up of the ground ops team cost us 45 minutes. Which is not good when my connection time in Chicago was just 55 minutes, which is already on the short side for such a big airport. I asked the flight attendant if they have any information on the connections, if they hold the plane or if we get rebooked. The answer I got was that they have no information and can’t get in touch with anyone on the ground. Comfortingly she said that they normally don’t hold planes and even try to get the international flights out on time and helpfully suggested that I could check the inflight magazine in the seat pocket for the fastest way to get from one concourse to the other. But she did offer me a red wine to help relaxing.

I had a window seat, and at least I got treated to some nice aerial views of Mount Hood, the barren landscape of Montana and of the Chicago skyline during arrival. For those photographs and how the story ended, continue after the jump…

END_OF_DOCUMENT_TOKEN_TO_BE_REPLACED 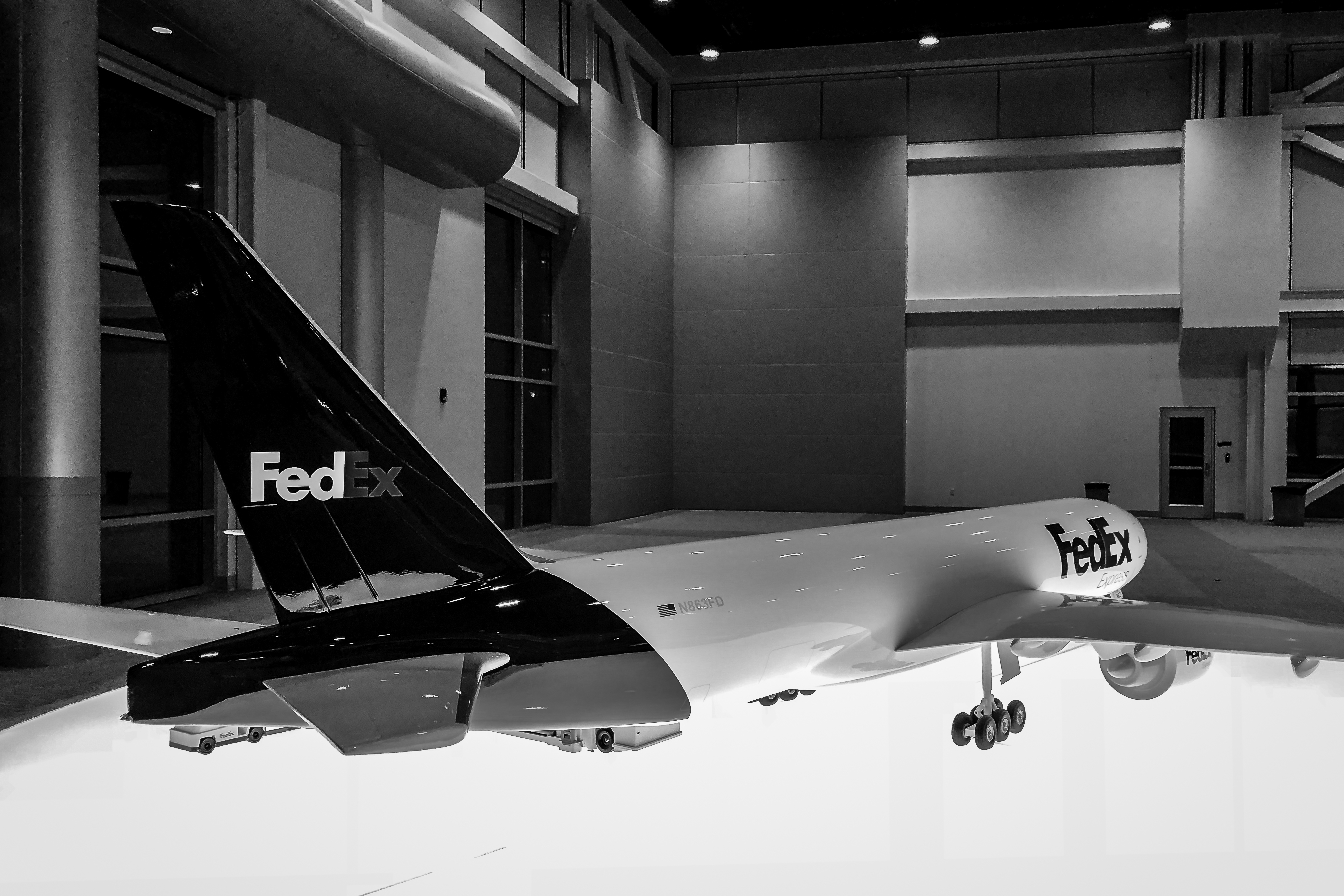 The job that pays the bills comes with some perks. One of them is that, occasionally,  I get to visit the headquarters of other corporation. This week I visited FedEx in Memphis, Tennessee. The global courier delivery services company that pioneered overnight shipping services and a system that could track packages and provide real-time updates on package location, was founded just 47 years ago (in 1971) by Frederick W. Smith, who to this is the President & CEO. Today the  company employs 425.000 people, owns a fleet of 670 aircraft, more than 185.000 vehicles and processes 14 million shipments each day.

After a day of meetings and great talks (among others with one of the right hand people of Fred Smith) we got treated to a tour of the FedEx Superhub at Memphis Airport, one of the largest logistics facilities in the world. For a bit more info, some pictures and the link to an interesting video about the hub continue after the jump…. END_OF_DOCUMENT_TOKEN_TO_BE_REPLACED

And at least I got to do some shooting in my favorite airport tunnel. For more photos continue after the jump… END_OF_DOCUMENT_TOKEN_TO_BE_REPLACED

Sometimes I feel like I’m gliding through this world like a ghost. Here, there, everywhere. Constantly changing places, changing tasks, seemingly always on a whisk, not able to properly plant a foot. The glory of business travel. After ten days in the Pacific Northwest I’m on my way home, currently at Zurich Airport, waiting for my last flight of the trip back to Nuremberg (this time my routing was PDX-SFO-ZRH-NUE). And hey, I got to catch at least a glimpse of San Francisco while approaching the Bay Area.

The flight across the big Ocean on a United Dreamliner B787-800 was kind of special, as, for the second time in not more than a few weeks, I had my Flight Captain retire on me. Like the first time back in July on a Delta Amsterdam to Portland flight, there was a big party organized by the crew, complete with a big sign in front of the cabin signaling the final farewell. Myself flying in seat 1D, I was surrounded by the pilots family, ready to embark on a European vacation after the final landing of an accomplished career at Zurich airport. Isn’t this a happy retirement in style?

The photo above was taken with the Olympus PEN-F and the mZuiko 12mm F/2. Image specs are 1/5 sec @ f/8 and ISO 1600. I had dialed in a slow shutter speed of 1/5 sec, perfect to capture the ghostly appearance of the passing shoppers on a Berlin evening. I loved the lighting of this shop window, the texture of the decoration. Then it was a matter to wait until two pedestrians passed each other in front. I shot in the monochrome mode of the PEN-F, intending a black&white image from the beginning.

Wish you a great Friday!

Here are some more variations from the passenger tunnel between concourses B and C of Chicago O Hare’s Terminal 1. I took the photos while connecting through ORD last week. They show a different view of the tunnel than the photos I showed in my post “Travel Day (13)“. A good example how you can play with your camera, working the scene with different creative approaches. For three more images continue after the jump…

END_OF_DOCUMENT_TOKEN_TO_BE_REPLACED

It’s been almost a week since my last post, but it was an intense work week in the Pacific Northwest, that, combined with a bad case of jet lag, left no room for blogging or venturing out with the camera. I had to wait until my return trip to Nuremberg to put the PEN-F and the mZuiko 17mm F/1.8 to work, albeit in one of my favorite connecting locations, Chicago’s O’Hare airport. The colorful tunnel between concourses B and C of ORD Terminal 1 is a great place for some street photography. For a few more photographs taken yesterday continue after the jump…. END_OF_DOCUMENT_TOKEN_TO_BE_REPLACED