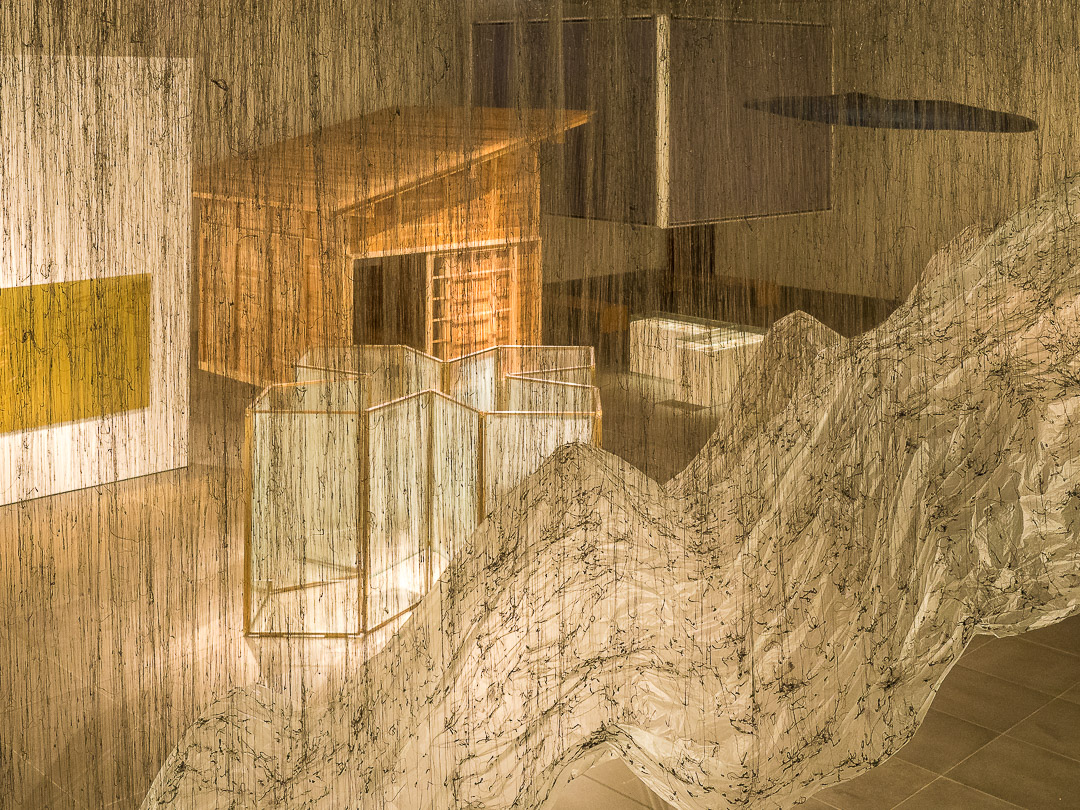 Yesterday I went into downtown Nuremberg for some street shooting, but the weather was super miserable, it was snowing heavily but due to the above freezing temperatures it melted immediately into a big soggy mess. So I decided to escape the streets and took my Olympus PEN-F with the mZuiko 12-40 F/2.8 Pro Zoom into the “Neues Museum Nürnberg“, our modern architecture art museum within the historic city walls. It currently features a special exhibition “On the Art of Building a Teahouse – Excursions into Japanese Aesthetics”, a topic that fits perfectly to a fascinating book I recently read – “Wabi-sabi for Artists, Designers, Poets & Philosophers” by Leonard Koren. For more photos and some more information about the exhibition continue after the jump…. 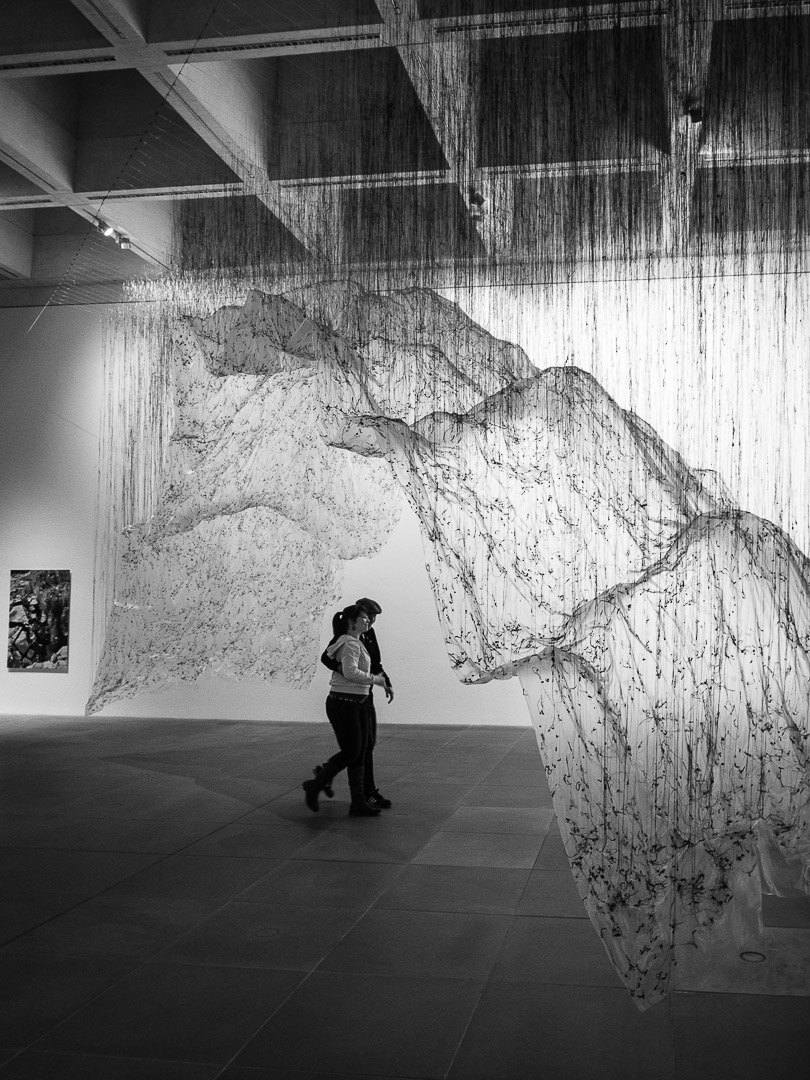 The exhibition centers around the traditional Japanese teahouse culture, since the days of the ancient tea master Sen no Rikyū (1522-1591) a place of spiritual experience. As also described in detail in the mentioned book by Leonard Koren, Sen no Rikyū understood the tea ceremony as a spiritual event in a simple tea house using objects made of materials that are vulnerable both to wear and tear, but with aesthetics of lightness, fragility and of simplistic beauty, which links Japan’s tea culture to Zen Buddhism.

Eye-catcher is the installation of a floating mountain scape by Yasuaki Onishi, made out of super light plastic foil held by strings of petrified hot plastic glue. 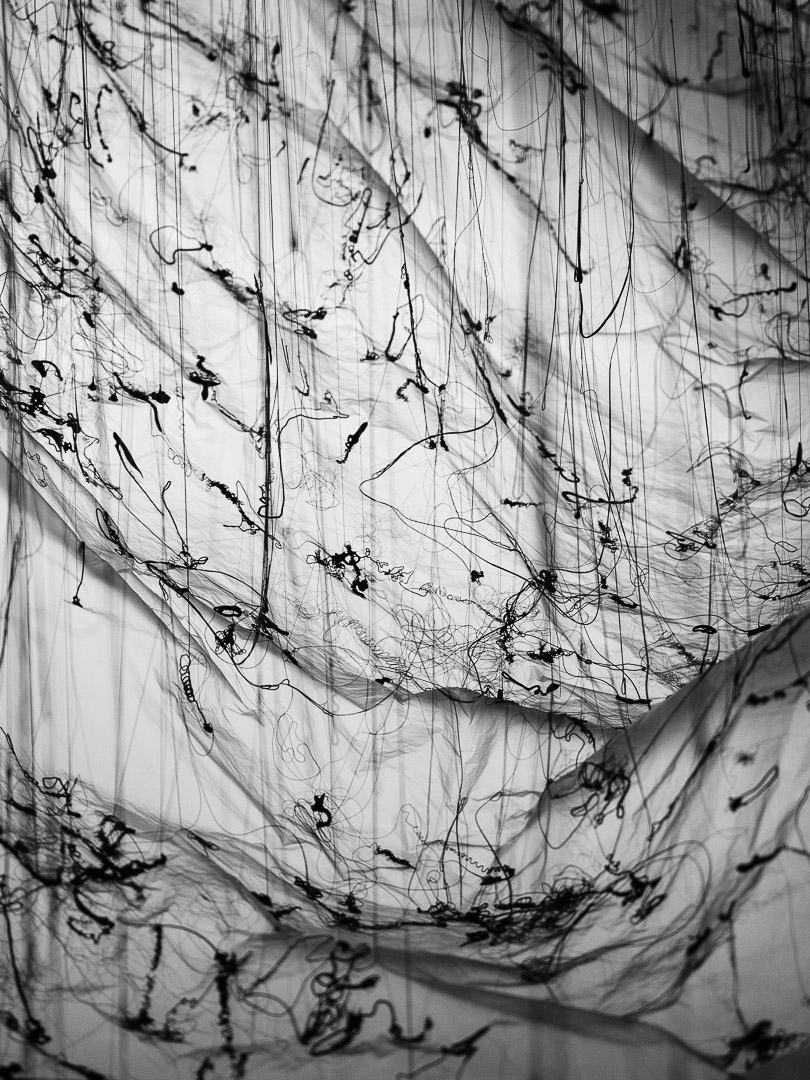 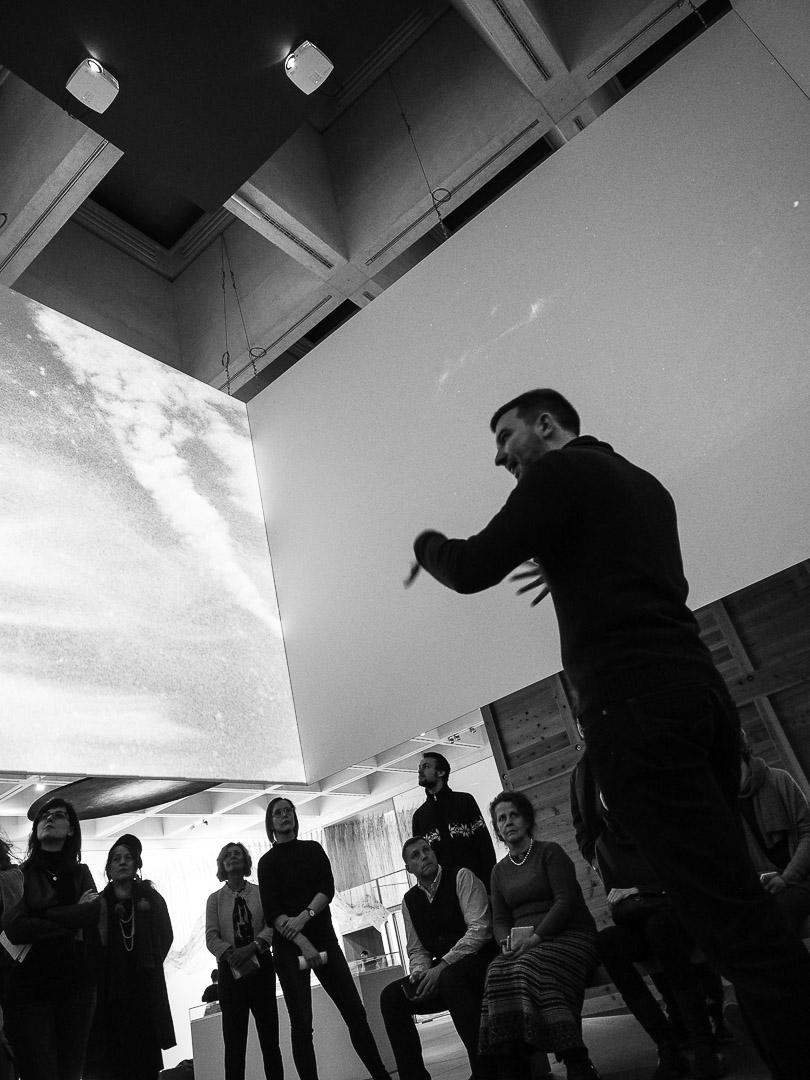 A large video installation by Japanese cinematographic pioneer Masanao Abe showed films of cloud formations around the summit of Mount Fuji he filmed in 1926. 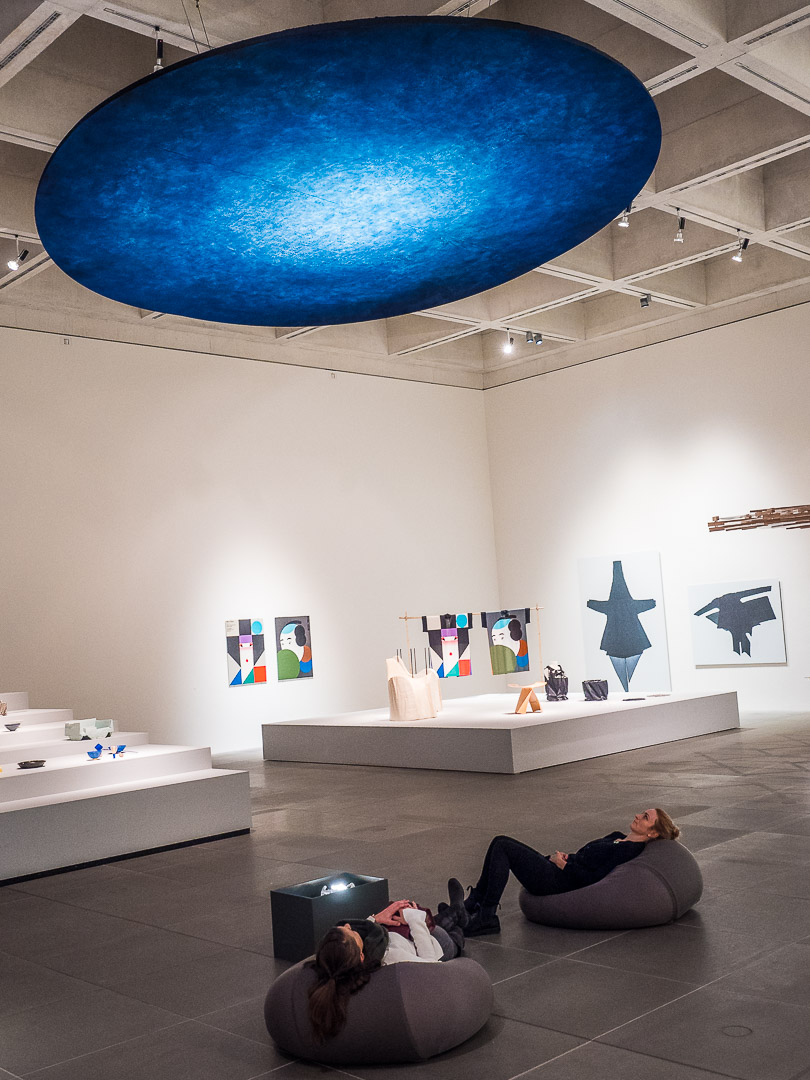 A fascinating object is also the blue disc by famous artist Makoto Ofune , hanging from the roof symbolizing the moon, with the resting chairs and the light beam on the ground  being like islands in the ocean. 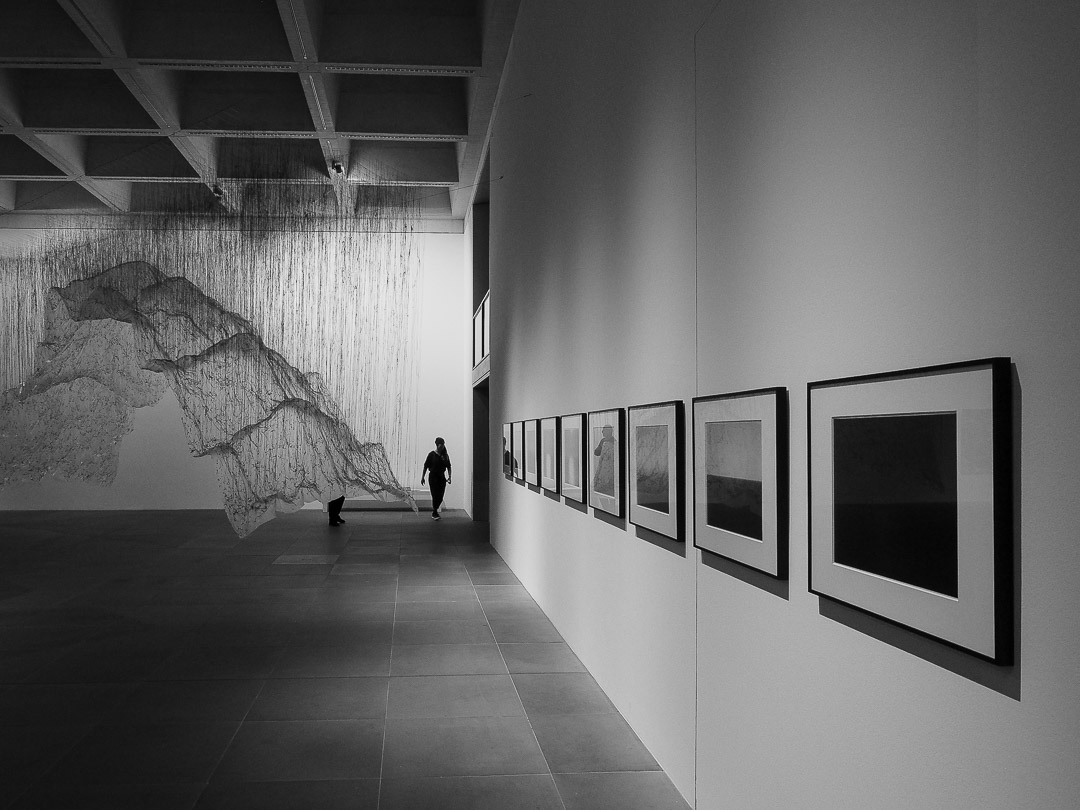 Also featured are zen- like photographs by famous contemporary Japanese photographer Hiroshi Sugimoto, where is shows the horizon between sky and sea in various states of visibility, a boundary that in reality is non-existing, as sky and sea never meet. Another featured photographer isNaoya Hatakeyama. 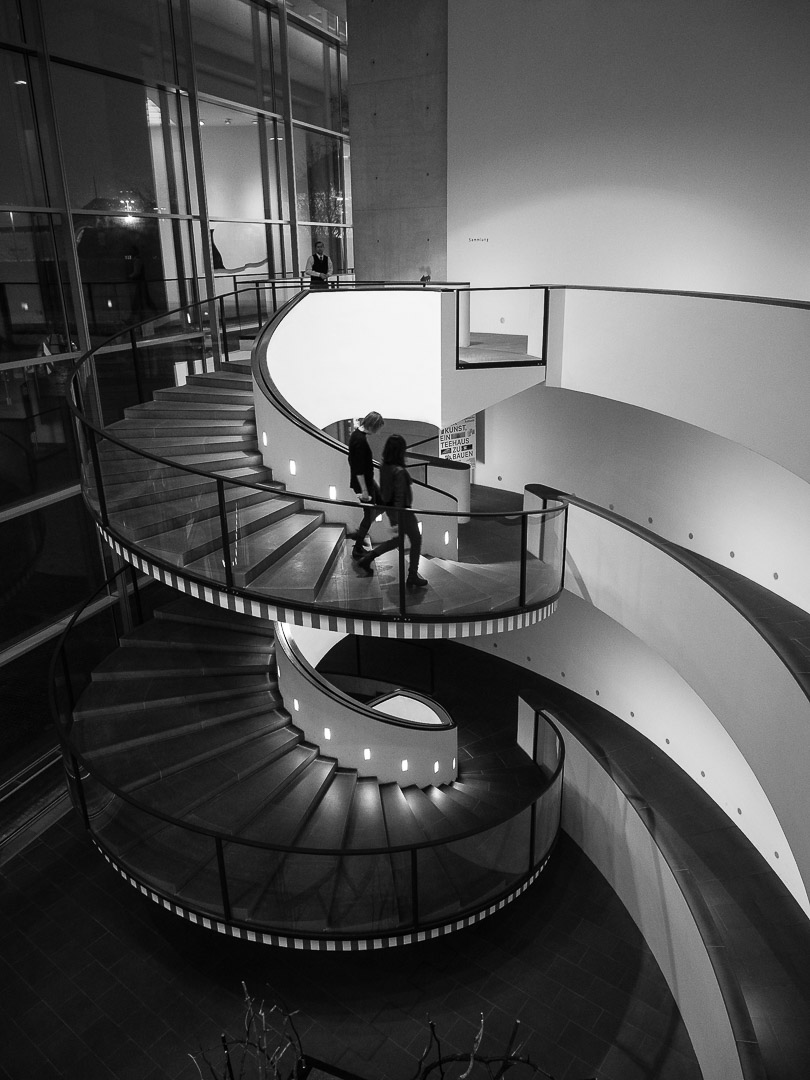 The Neues Museum Nürnberg, a museum of north art and design, opened in 2000 and is well worth a visit, also because of its stunning architecture.

Great of all of us photographers is that you can bring your camera and are free to shoot, as long as you don’t make use of flash and tripod. All of the shots in this post were taken handheld, slowest shutter speed was 1/25 sec which is no problem whatsoever for the PEN-F with its great image stabilization.

I wish you all a happy, peaceful, relaxing and creative Sunday!

29 thoughts on “Soggy outside? Shoot in an exhibition!”