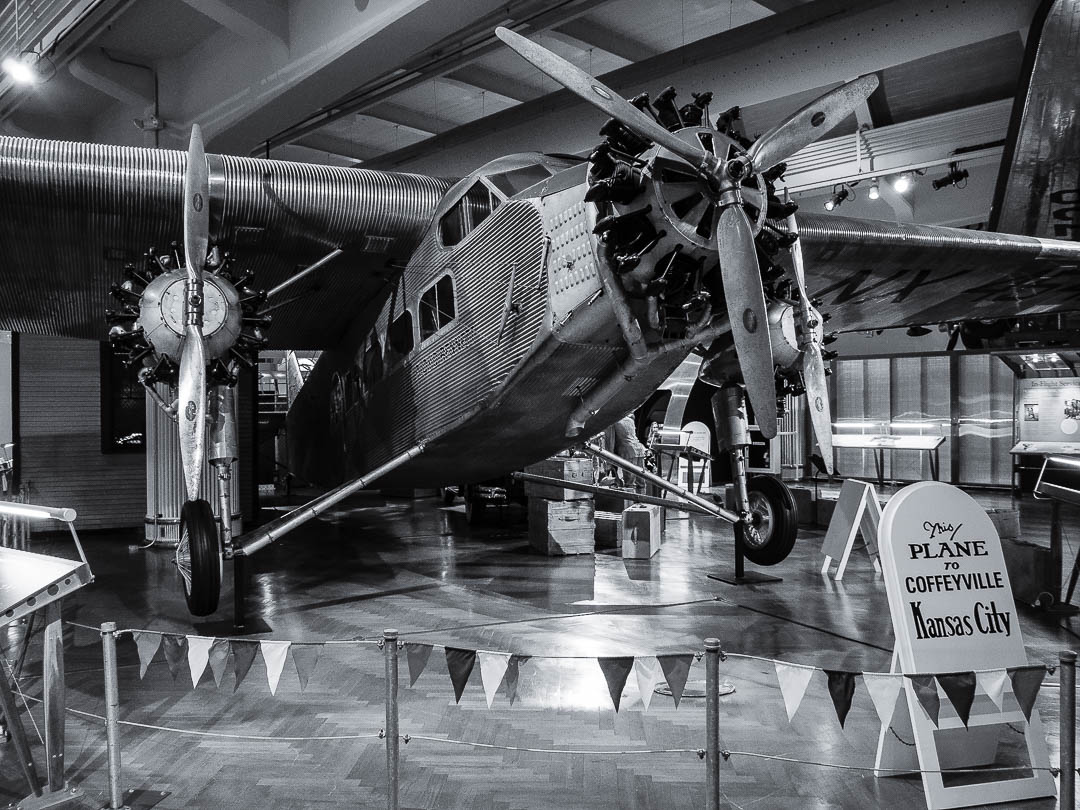 While I was in Detroit this past week there was no time to see anything besides airport, hotel and office. So in order to show you something from my latest travel destination I went back to my 2013 archive where I did spend a weekend in Motown. Back then I visited the Detroit Institutes of Arts, one of the principal art museums in the US, the Ford automotive plant in Dearborn and the nearby Henry Ford Museum. From this awesome museum are the photos  for today’s post, triggered by a conversation I had with fellow blogger  Tim S. Allen (check out his great site!) about a vintage airplane, the Ford Tri-Motor, that first flew in the 1920s. Tim, this is for you!

To see more photos of this magnificent vintage passenger liner, read about its history (it was the first plane that flew over the South Pole) and some interesting information about the Henry Ford museum (it has some really historic artifacts on display) continue reading after the jump…

The Ford Tri-Motor (nicknamed “Tin Goose”)  was the most popular airliner of the late 1920s and early 1930s. The plane with its rugged all-metal design was powered by three Wright radial engines with 525 hp (center engine) and  200 hp (outboard engines). Because of its high reliability polar aviation pioneer Richard Byrd choose a Ford Tri-Motor for his attempt to be the first person to fly over the South Pole, which he achieved on November 28 1929 in this very plane named “Floyd Bennett” which is on display at the Henry Ford Museum in Dearborn, Michigan near Detroit.

All of the below photographs were taken with my Olympus OM-D E-M5 with the mZuiko 14-150mm F/4.0-5.6 travel zoom. Most images were taken with an aperture between f/5.6 and f/6.3 and ISO 1600, which gave me shutter speeds between 1/15 sec and 1/25 sec. Because of the excellent stabilization of the Olympus m4/3 cameras these low shutter speeds still allow sharp hand held shooting. B&W conversion was done in Adobe Lightroom CC. 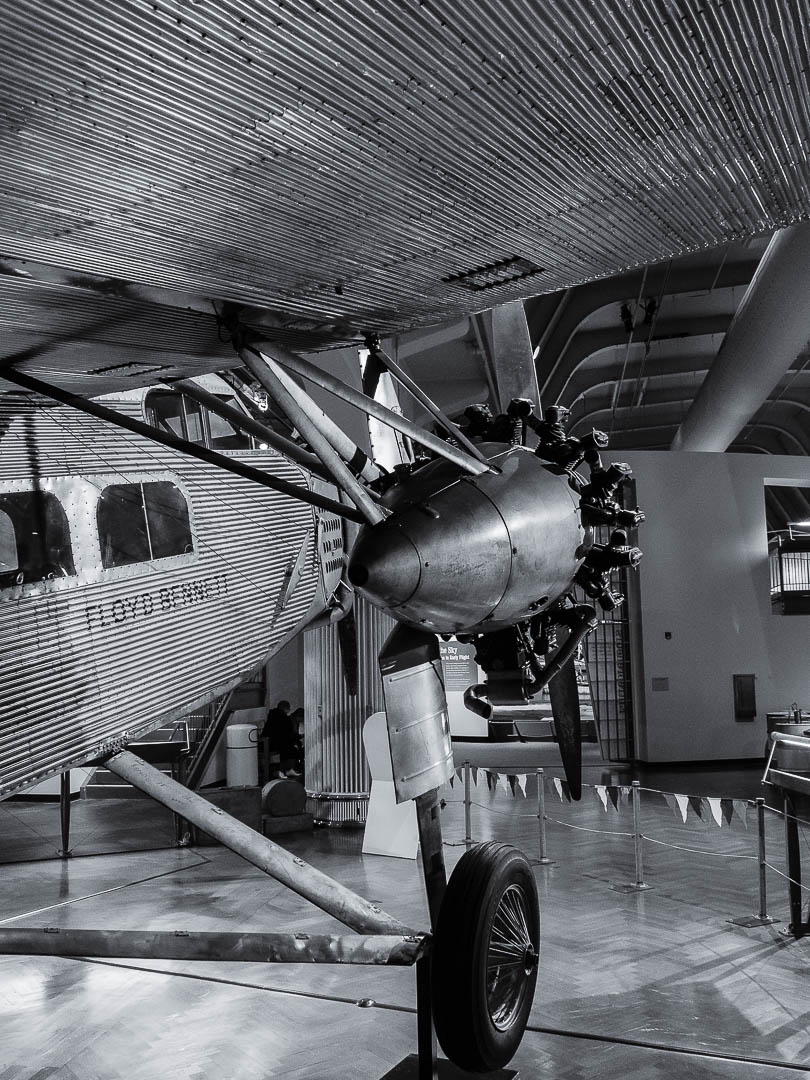 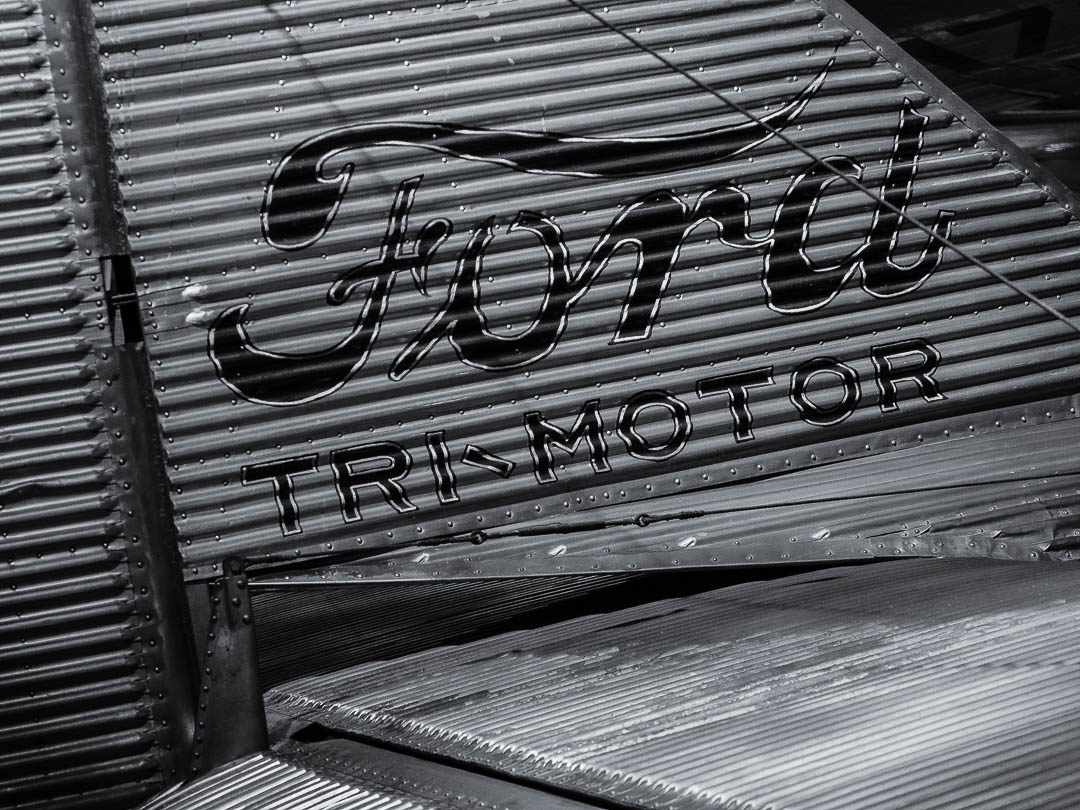 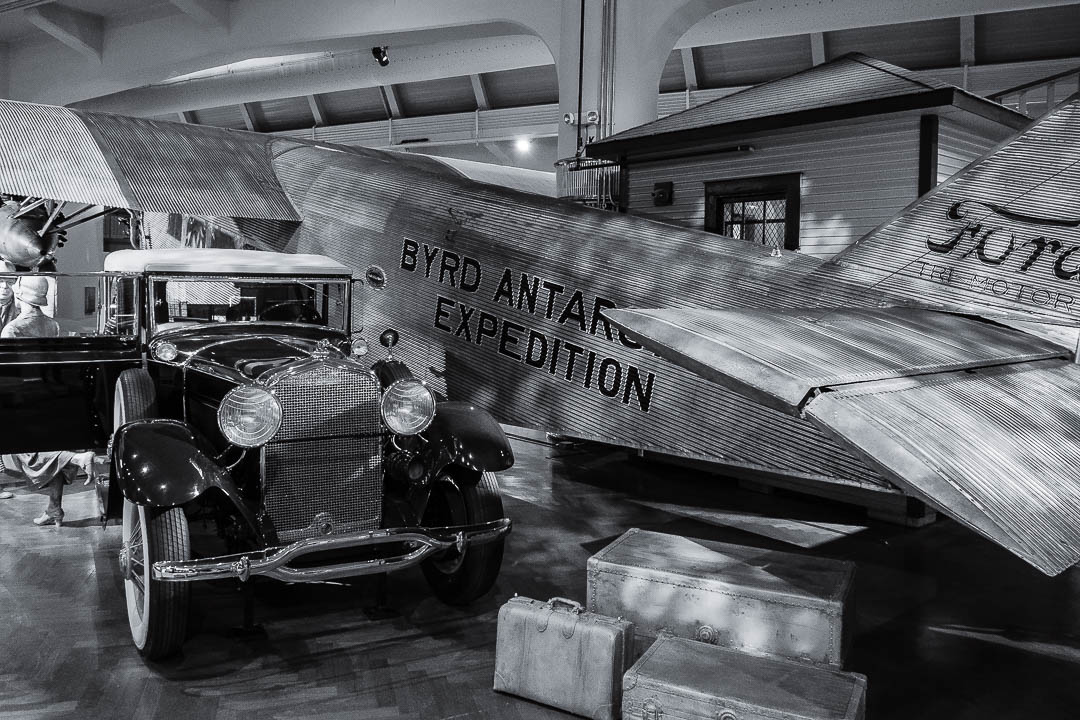 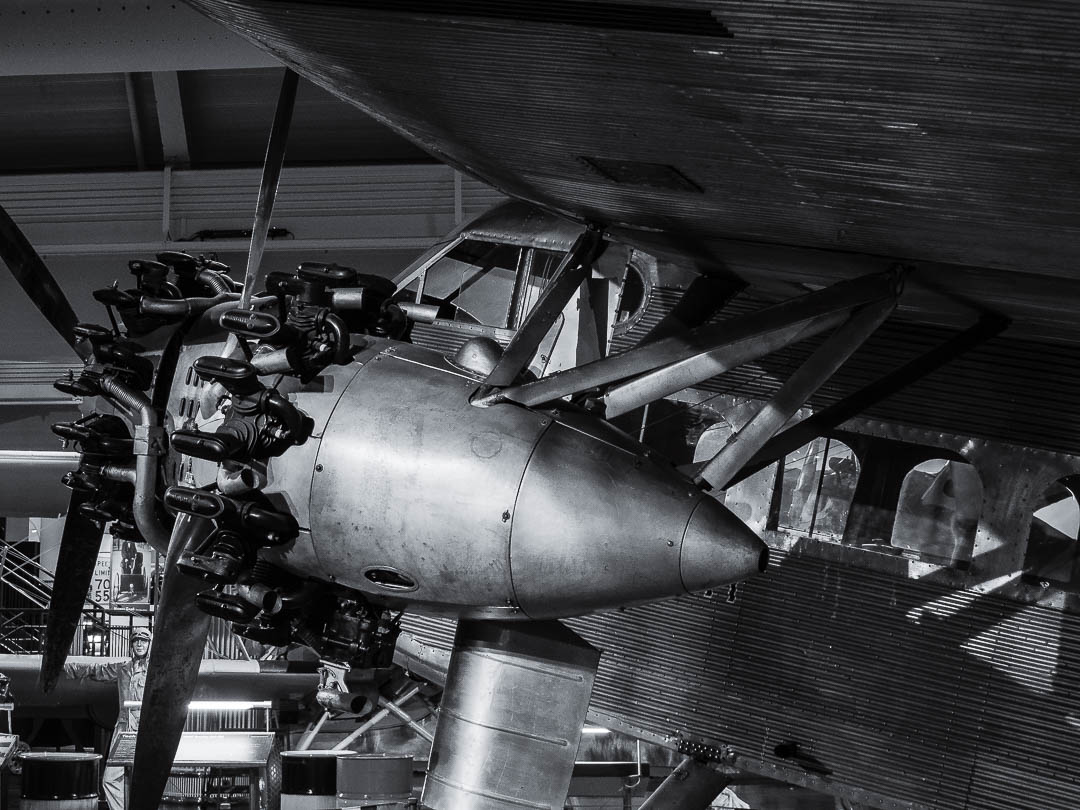 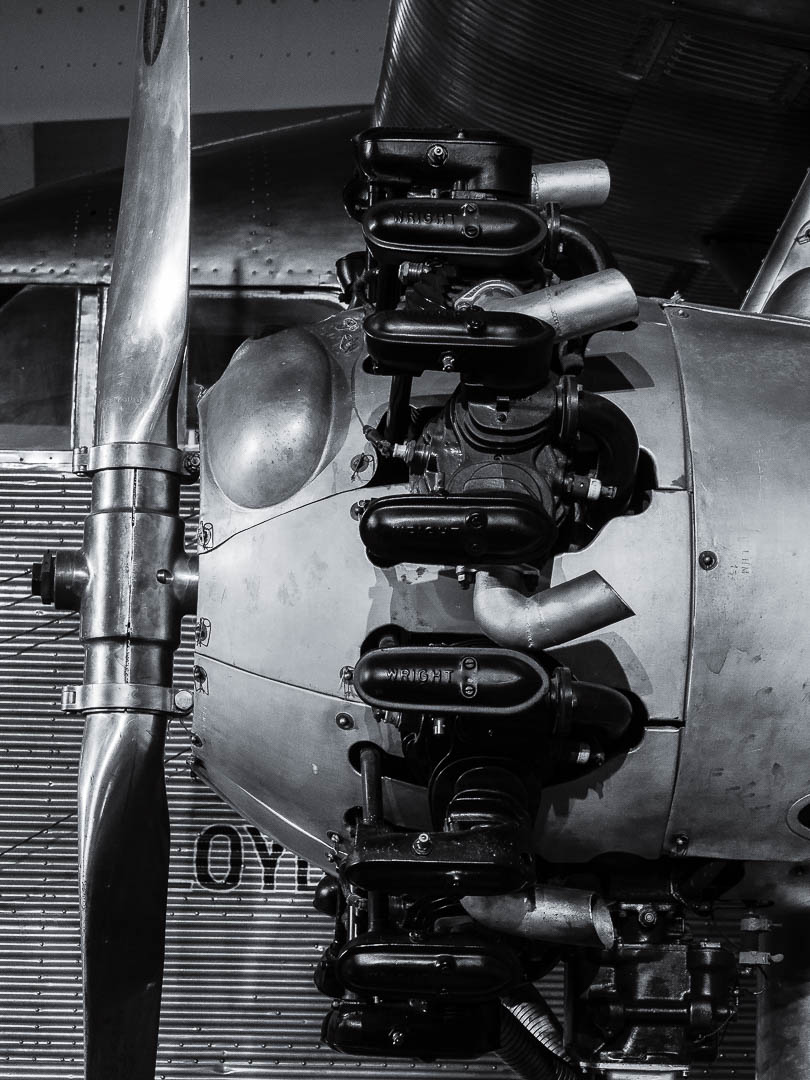 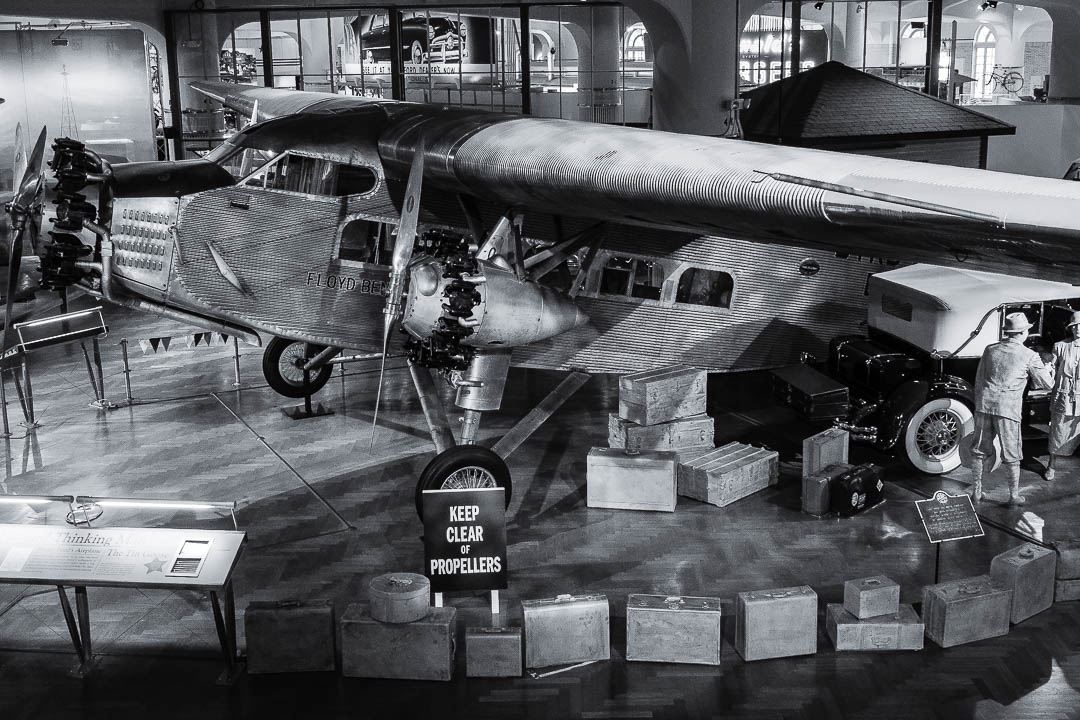 Here is the link  to the Henry Ford Museum where I took these images of the Tin Goose:

The museum is quite spectacular, containing a great collection of vintage airplanes, cars, trains and  great historic artifacts like the presidential limousine in which John F. Kennedy was assassinated, the chair from Ford’s Theatre in which Abraham Lincoln was shot, Thomas Edison’s laboratory and the Wright Brothers’ bicycle shop. The Henry Ford  is the largest indoor-outdoor museum complex in the US and is visited by 1.6 million people each year. A visit can be combined with a factory tour of the Ford Rouge plant where the Ford F150 trucks are manufactured.

StoNur on the Road – Color Splash

21 thoughts on “StoNur on the Road – Vintage Propliner”