Surely on of the highlights of every Namibia trip is a visit to  Sossusvlei, a salt pan  surrounded by high red dunes, located in the Namib-Naukluft National Park. The name Sossusvlei can be translated with “dead-end marsh”. Sossusvlei is the final drainage basin for the Tsauchab river, who ends here and will never see the coast of the Atlantic Ocean. To find out more about this fascinating natural marvel in the Namib desert continue after the jump… 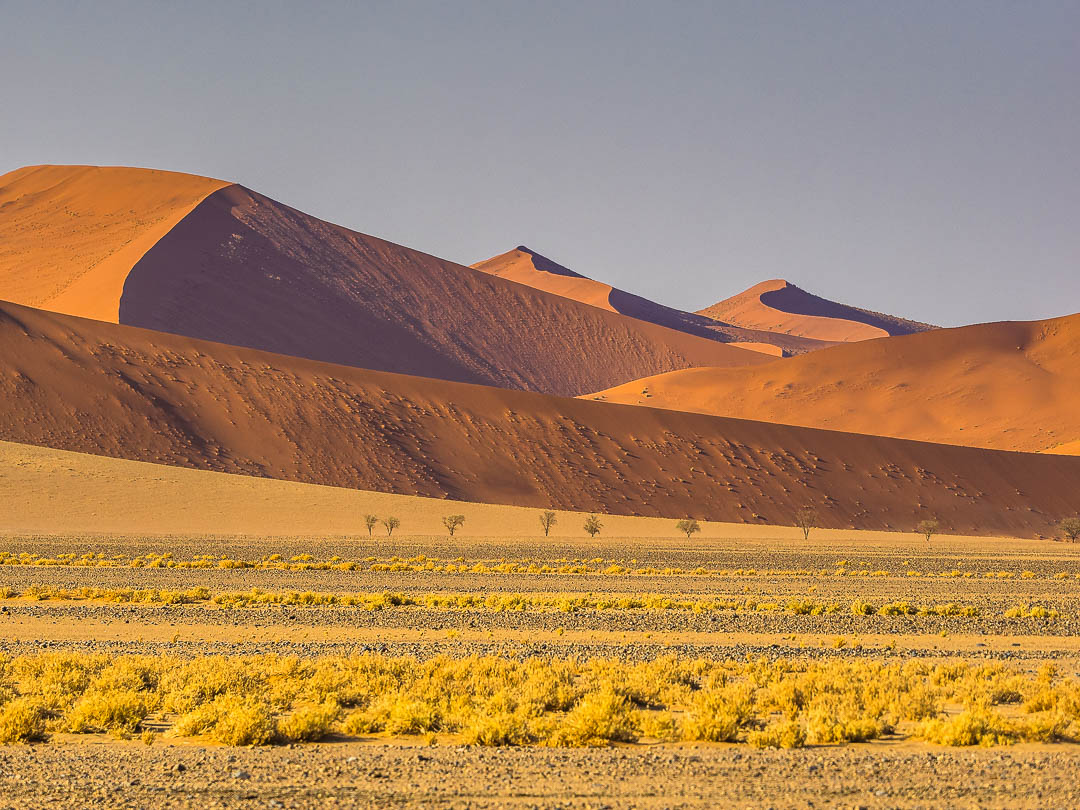 Access to the Sossusvlei area of the Namib-Naukluft National Park is from the Sesriem gate, from which a 60 km road leads to the Sossusvlei. The gates to the National Park open at sunrise 6:30, then it takes about 90 minutes to arrive at the salt pan. We wanted to make the most of the early morning light and planned to be right at the gate at opening time. But like during our first visit 23 years ago, we had a punctured tire the night before traveling to Sossusvlei. So first (at 6 am) we had to change the tire on our Toyota Fortuner rental 4×4, meaning we arrived 45 minutes later than planned. Still, the light was fantastic while driving the 60 kilometers between the dunes. 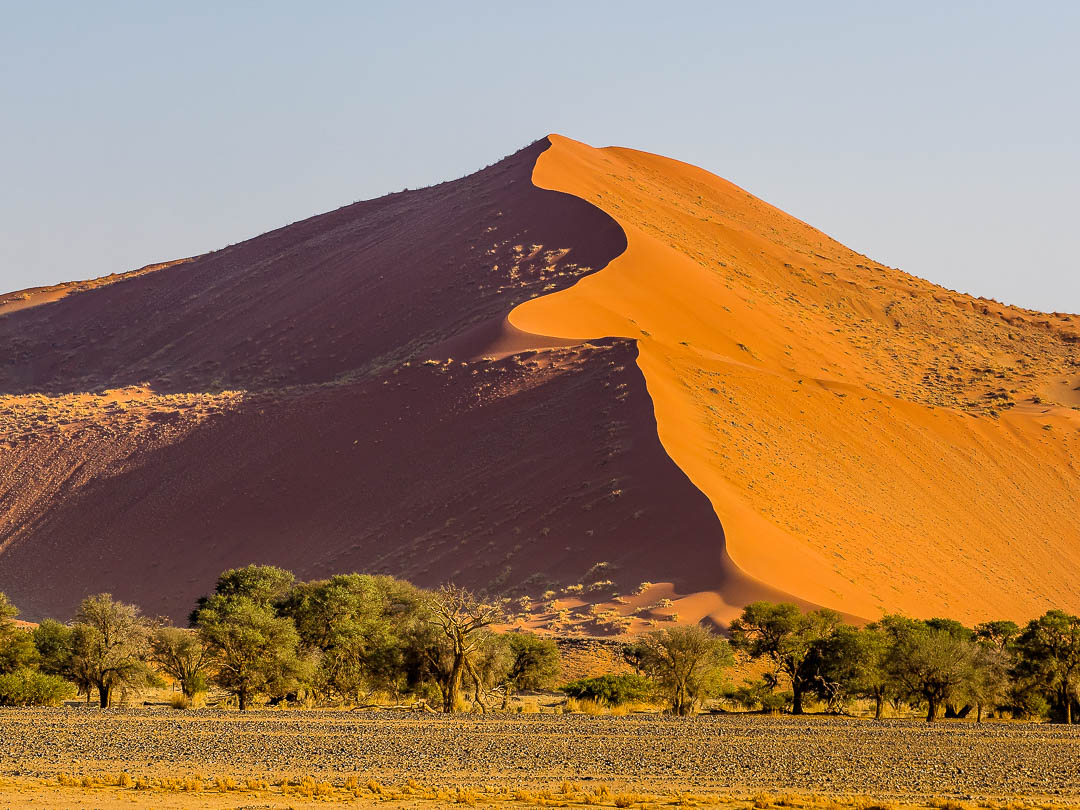 The dunes have a  vivid pink – orange color, the quartz sands having a high concentration of iron and are subject to an oxidation processes. The oldest dunes are those of a more intense reddish color. These dunes are among the highest in the world – many of them are above 200 metres, the highest towering above the Deadvlei being nicknamed Big Daddy, about 325 metres high.

In the rare occasions the Tsaucheb river carries water, the vlei actually floods, when dry, these pans look almost white in color, due to the high concentration of salt. Another relevant source of water for Sossusvlei is the humidity brought by the daily morning fogs that enter the desert from the cold Southern Atlantic Ocean. In any case there is enough water for some vegetation to grow, that also feed roaming antelopes like the Oryx. 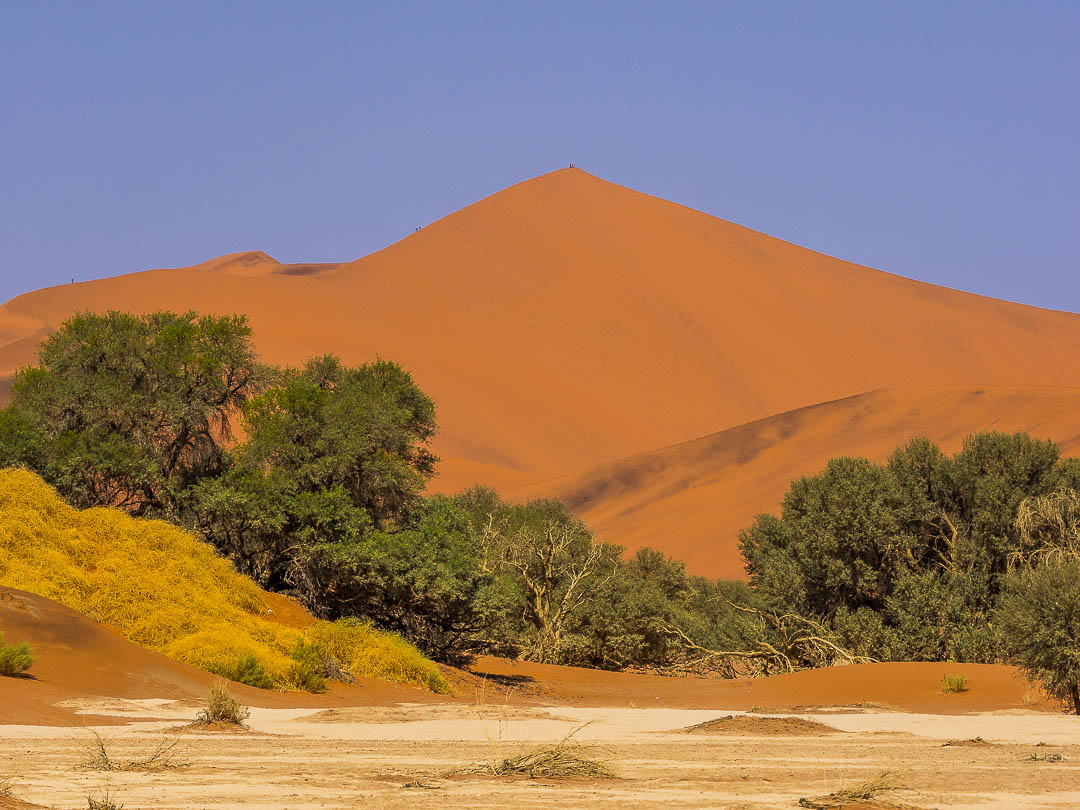 We climbed “Big Mama”, the dune behind the Sossusvlei. Everywhere are traces in the sand, left by insects and other small animals like blizzards and snakes. After a steep ascent we had a great time just running down the side of the dune down to the vlei. 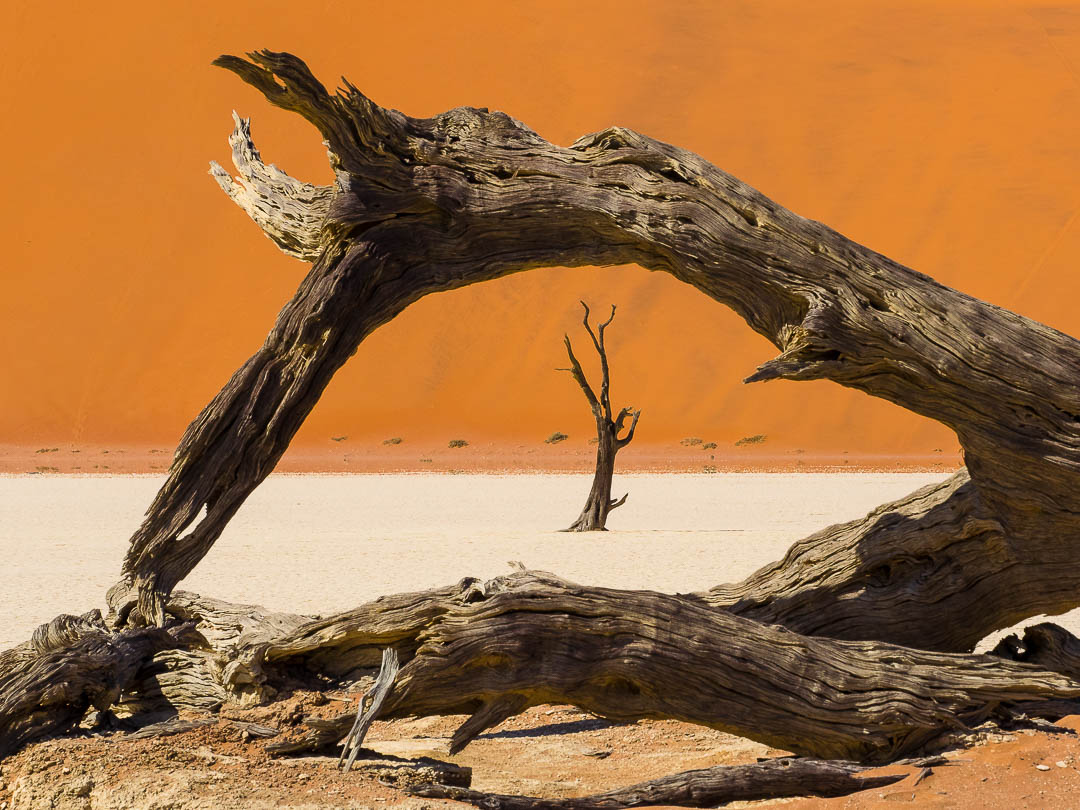 A highlight was also the visit of the Deadvlei, a neighboring salt pan that features a large number of dead trees, killed when one of the large sand dunes passed over them. 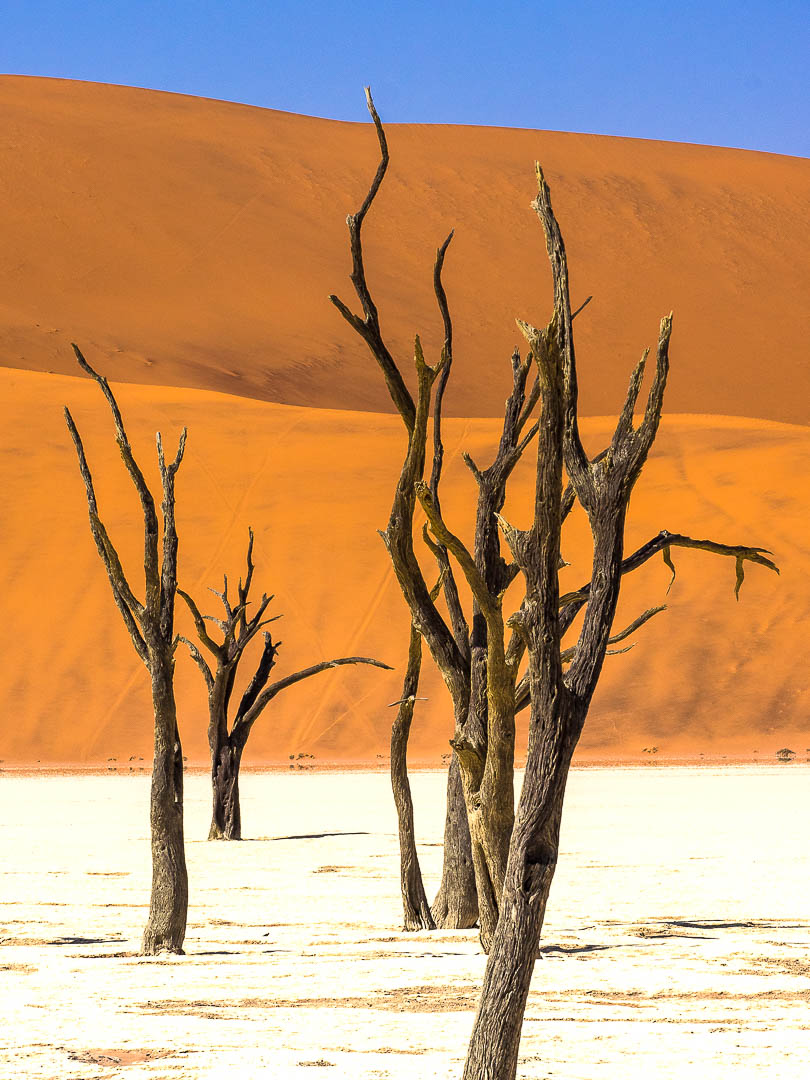 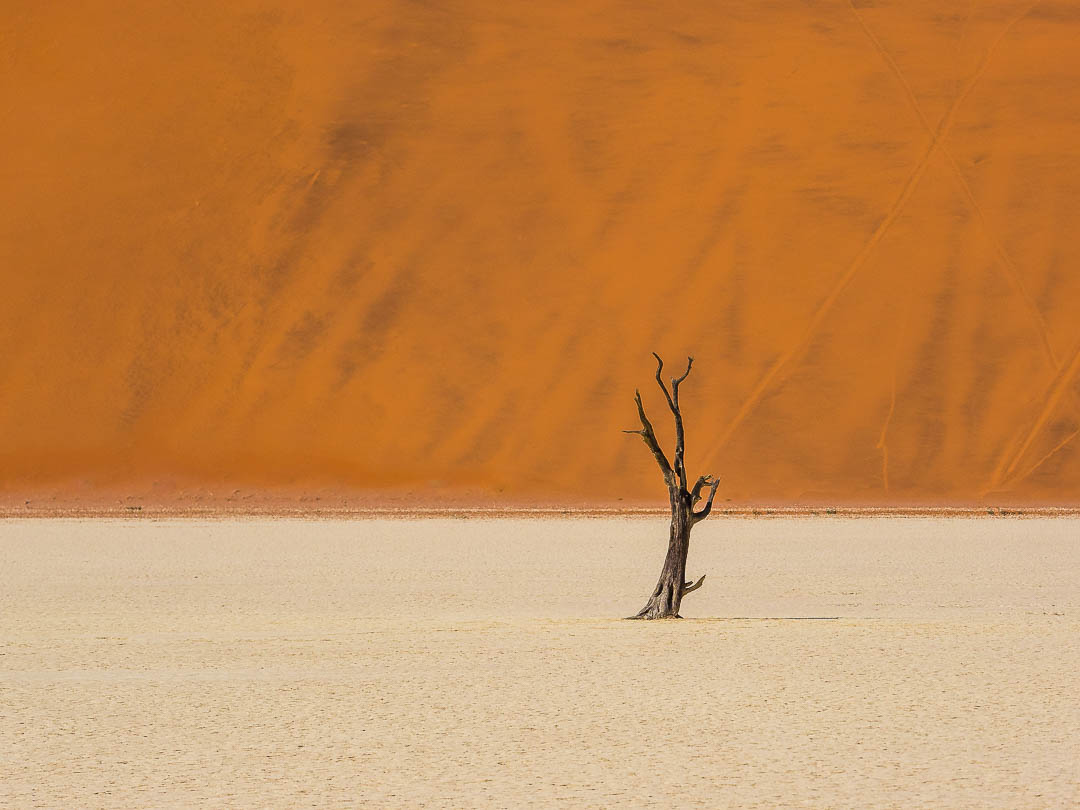 Photographically challenging is that you work in an environment full of fine sand. In order to avoid changing lenses I brought two bodies, the PEN-F with the 12-40mm F/2.8 and the OM-D E-M1 with the 40-150mm F/2.8. Ok, carrying two cams up a 300m dune in the Namib desert might sound crazy, but then again, this is why I switched from a Nikon DSLR system to Olympus mirrorless.
In the Deadvlei was also a group of traveling photographers, each equipped with at least two full frame bodies and various big lenses hanging from both sides of their bodies, so I felt very light and comfy with my two small Olympus mirrorless  cameras. 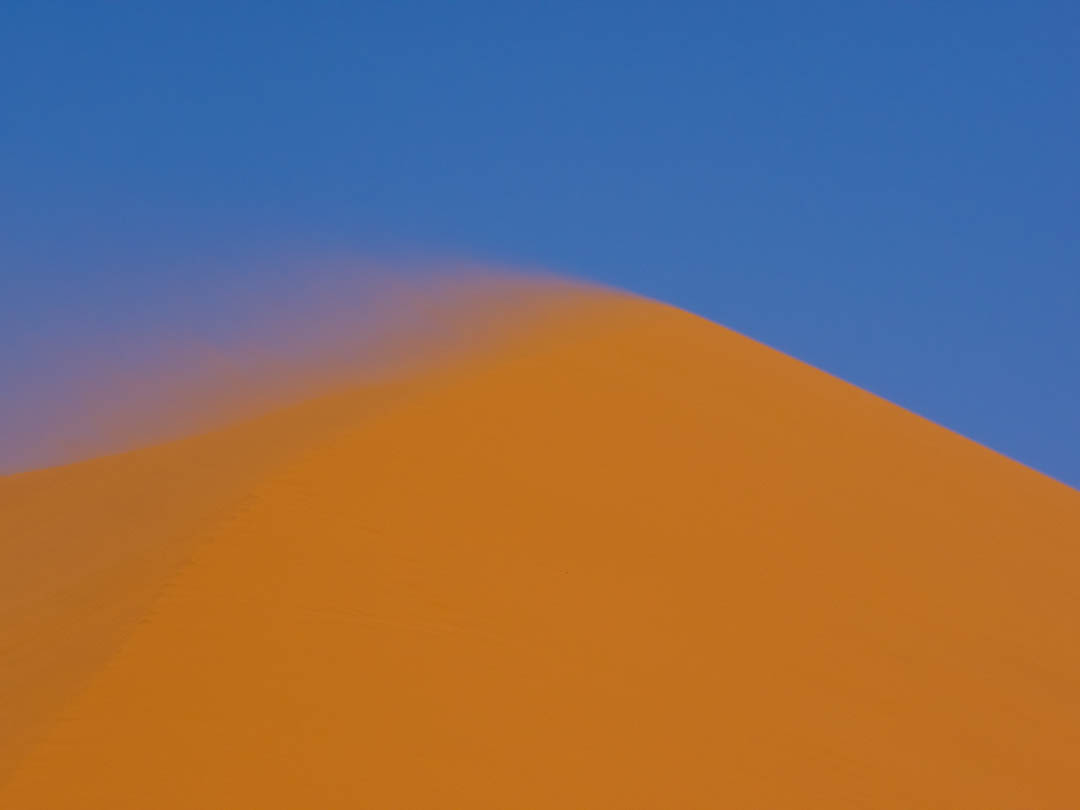 I hope you liked this little trip into the Namib Desert and the stunning high sand dunes of  Sossusvlei.
We continue back to the coast, to see the sea side of those great dunes at Sandwich Harbor near Walvis Bay. Stay tuned for more!
Have a good Wednesday!
Marcus
Related Posts:
Namibia Explored – Quiver Tree Forest
Namibia Explored – Diamond Ghost Town
The Streets of Windhoek
Namibia Explored – Fish River Canyon
Namibia Starry Night (and how I photographed it)