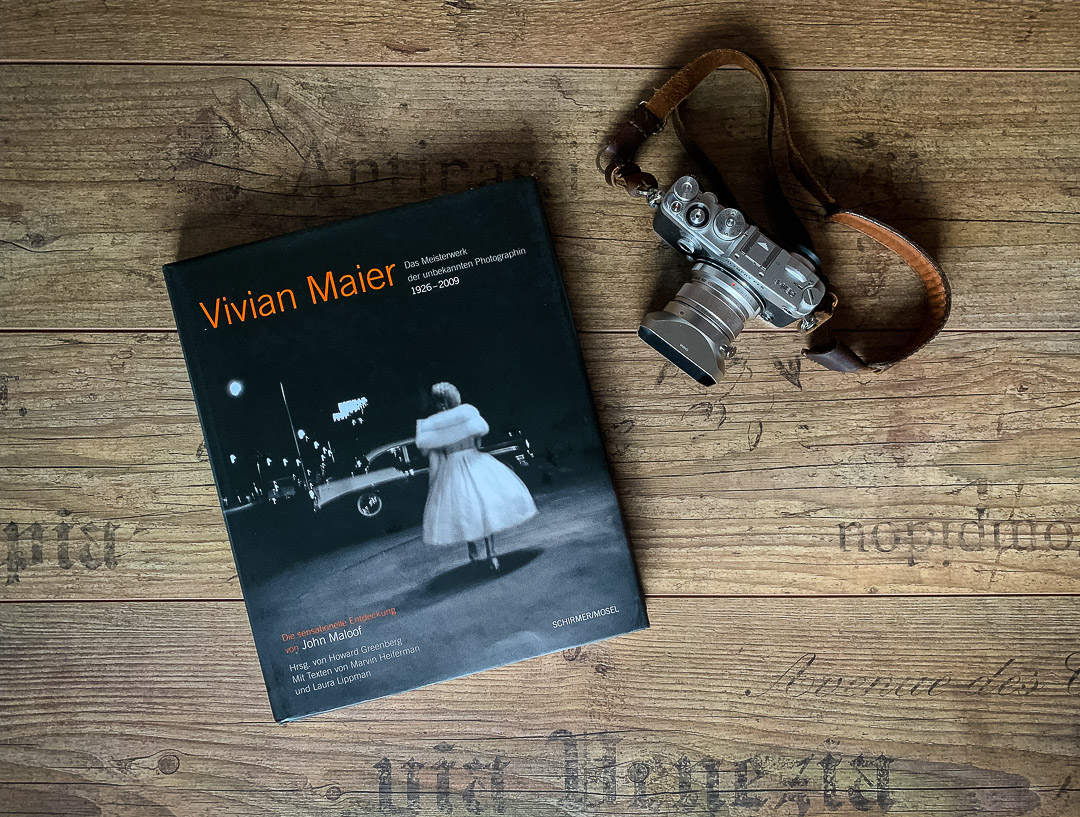 With the start into the New Year and the fourth year of this blog, I’m launching a new series called “Buy books not gear”. As stated in my last post of 2018, I firmly believe that by reading good photography books we can improve our own photography much more than by buying yet another new camera or lens.

I’m starting the series giving you a glimpse into a marvelous coffee table book about the work of street photographer Vivian Maier, that I couldn’t resist picking up after seeing it in the window of a book store.

With her beloved Rolleiflex hung around the neck, always ready to shoot, Vivian Maier (1926-2009) wandered the streets of Chicago where she worked as a nanny for various families for many years. She photographed everything that came before her lens. She was an amazing street photographer, captured live as it happened since the early 1950’s, first in black and white, later also in color. Vivian photographed with a fine sense of humor, and, occasionally, with a tendency to be bizarre. As many of her photographs show, she felt connected to the poor and miserable.

Famous street photographer Joel Meyerowitz expressed himself enthusiastically about Vivian’s work: “She had an unadulterated view and a genuine understanding of human nature, photography and the street.

Vivian took numerous self portraits,  she always photographed herself indirectly: in a shop window, in an escape of room mirrors, in a rear-view mirror. Sometimes she appeared only as a shadow, like a ghost living only through the camera.

It was only by chance that her extensive photographic work was discovered and snatched from oblivion. Former real estate agent John Maloof had bought up her estate at an auction. While cleaning it out, he found boxes with negatives, film rolls and other things, including letters, bills, receipts, cinema tickets, bus and train tickets, several tapes discussed by her like a diary. The photographic find was gigantic: 150,000 negatives, 700 color film and 2000 black-and-white film rolls, all undeveloped, as well as 8 and 16 millimeter films.

Maloof has recognized the treasure he had accidentally discovered and began to market it: First he began to scan the negatives, then he put pictures on a website, with a tremendous response, and finally he organized exhibitions. Since 2011 he has been sending Vivian Maier’s work around the world. The photographer herself didn’t notice any more the hype surrounding her, she died lonely and impoverished at the age of 83 in 2009.

I adore Vivian Maier and her approach to street photography, as her style is very similar to how I like to shoot in the streets. I love her sense of humor as well as her direct approach to many of her subjects, her eye for seemingly lost details of everyday life. Her portraits of everyday people are powerful, and through her work she perfectly transmits the atmosphere of life in in 50’s – 70’s.

I find her work  full of inspiration for the aspiring street photographer as well as the seasoned veteran. If you have a chance to see an exhibition of her photographs I highly recommend visiting it. For all others interested in Vivian Maier I can only recommend this superb book: Vivian Maier: A Photographer Found  (German Title is Vivian Maier – Das Meisterwerk der unbekannten Photographin).

The book also provides an in-depth introduction to Vivian and tells the story of the discovery of her work by John Maloof.

All images in this post (except the first) are by Vivian Maier and taken out of the book for the purpose of this review.

I hope you liked the first episode of my new series “Buy books not gear”.

If you look for tips and inspirations around photography, check out my free Learning Center. Here, I will also post the links to this and all future book reviews.

Soggy outside? Shoot in an exhibition!Street Photography Below Street Level