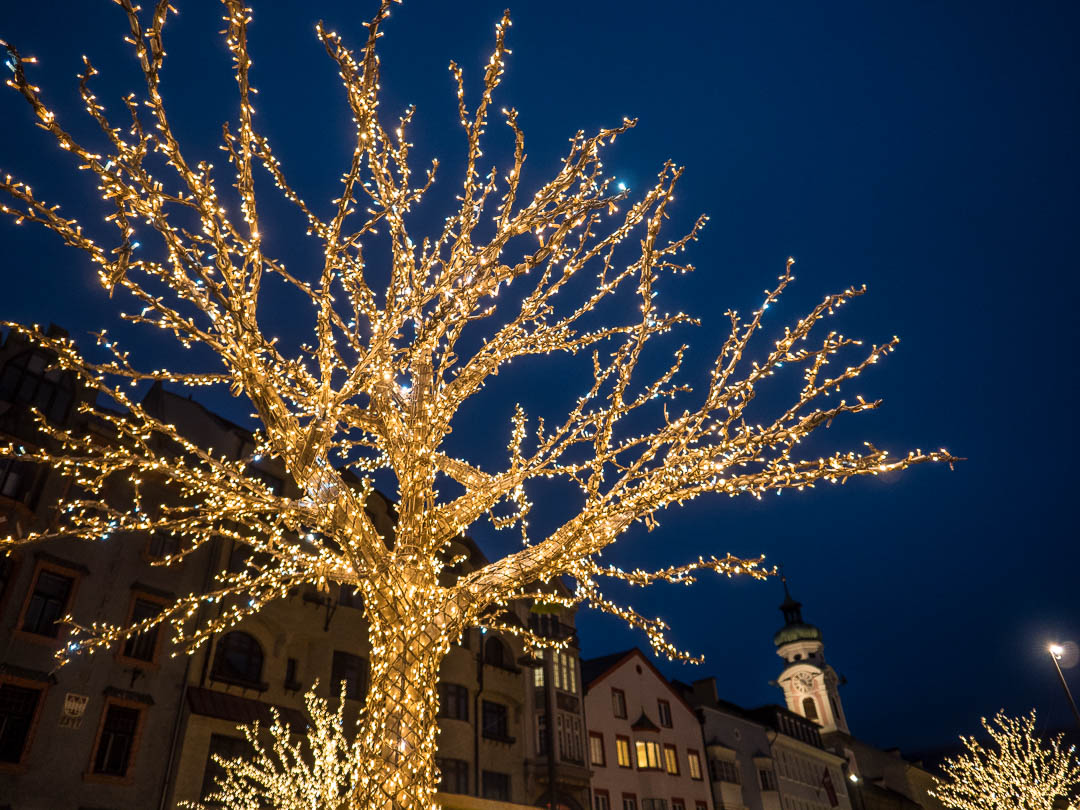 Last week we travelled to Innsbruck, Austria to spend the weekend in the beautiful mountain chalet of two friends (A&O, if you are reading this – thanks so much again for the great time). Besides great talks, food and lots of relax we drove down to the historic city center of Innsbruck to visit the Christmas Markets in the Old Town and on the banks of the Inn river. For more details  about Innsbruck and plenty photographs continue reading after the jump…..

Innsbruck is the capital of Tyrol in the Inn valley at the foot of the Brenner Pass, the main traverse of the Alps on the road between Munich and Verona in Northern Italy. Innsbruck was host city to the Olympic Winter Games of 1964 and 1976. The city was known in Roman times as Oeni Pontum, which means Bridge over the Inn. In the 15th and 16th century Innsbruck was a center of European politics and residence to Emperor Maximilian I. Due to its location on a major European trade route the city and its merchants came to wealth which resulted in the building of a magnificent Old Town with many splendid merchant homes. And in this setting one of the most beautiful Christmas Markets in Europe takes place in the five weeks leading up to Christmas. 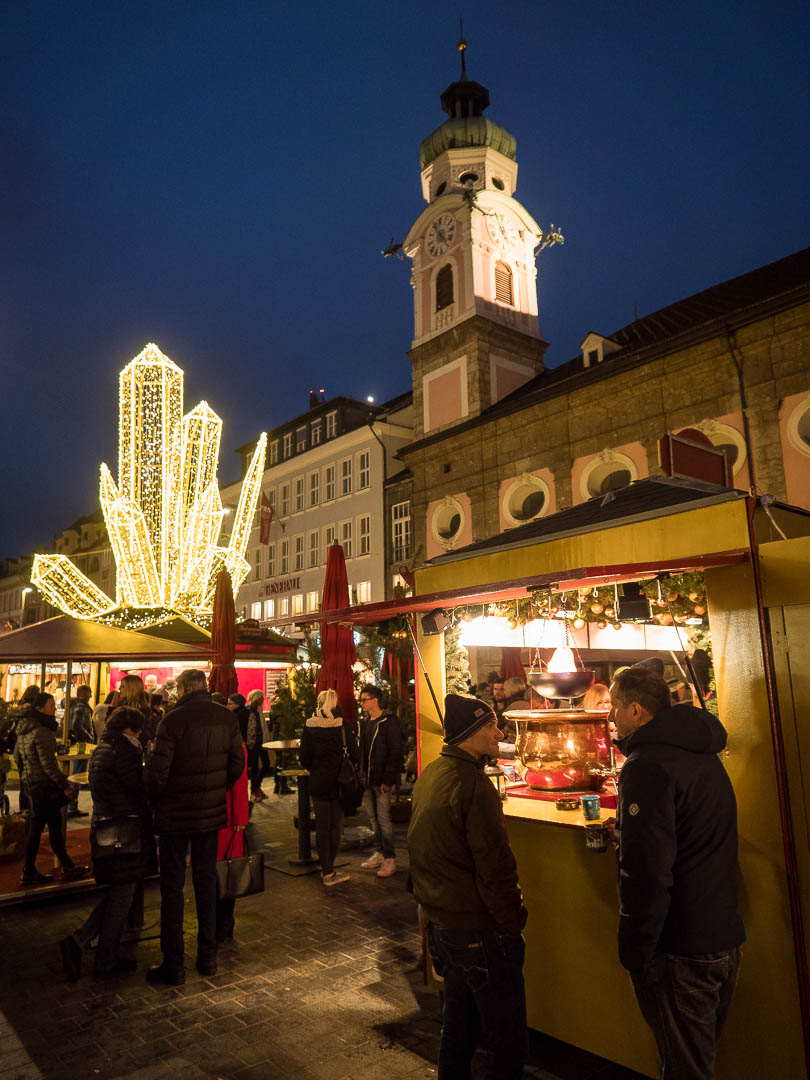 Parking is easy in on of the garages in the city center, we used the one under the Rathaus-Galerien Shopping Centers. From there one can exit directly to Maria-Theresia Strasse where we found ourselves in the middle of a sea of lights with an illuminated mountain crystal several meters high as an eye catcher. The little stalls offering the usual mix of food, drinks and art work. 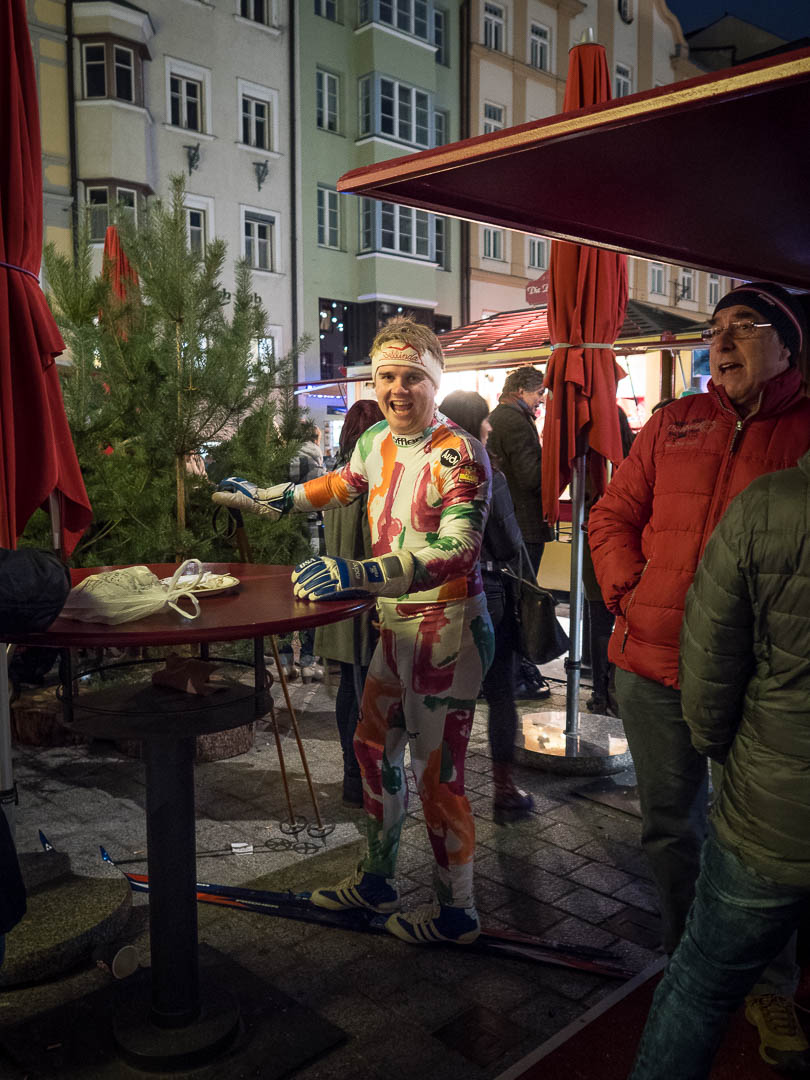 Obviously the visitors had fun, as demonstrated by this cross-country skier that all of a sudden appeared between the stalls, despite the obvious lack of snow. 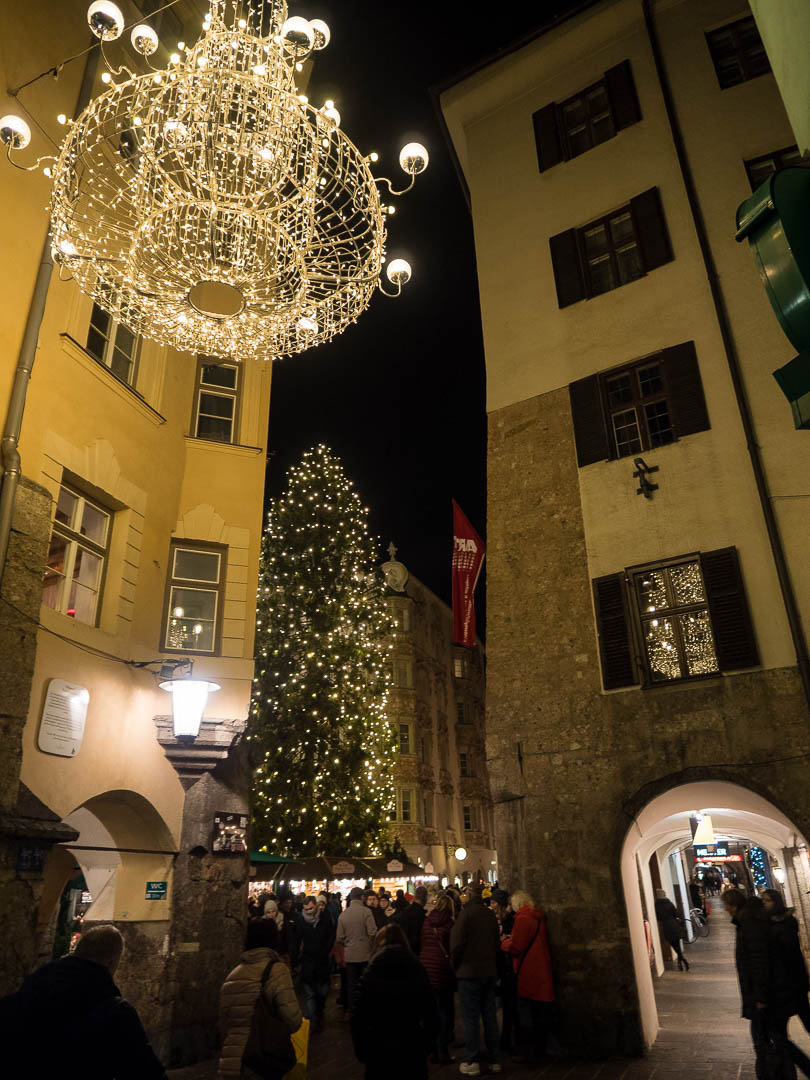 Continuing down Herzog-Friedrich-Straße we came to the older part of Innsbruck’s magnificent  Old Town with the narrow alley ways and old merchant homes. The alleys were splendidly illuminated with chandeliers hanging high above our heads between the old houses. Next to the huge main Christmas Tree is one of the touristic highlights of Innsbruck, the Golden Roof or “Goldenes Dachl”. 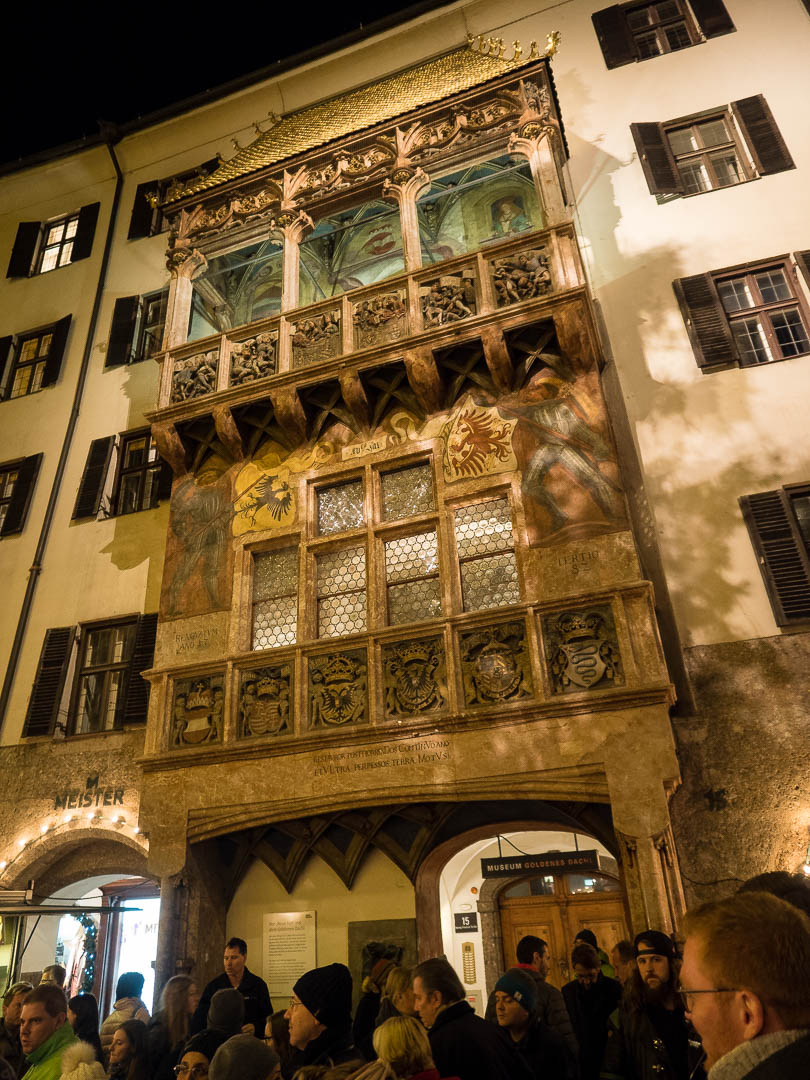 Completed in 1500, the roof was decorated with 2,738 fire gilded copper tiles that have a golden tone. It was commissioned by Emperor Maximilian I  for the occasion of his wedding to Bianca Maria Sforza. The Emperor and his wife used the balcony to observe festivals, tournaments, and other events that took place in the square below. 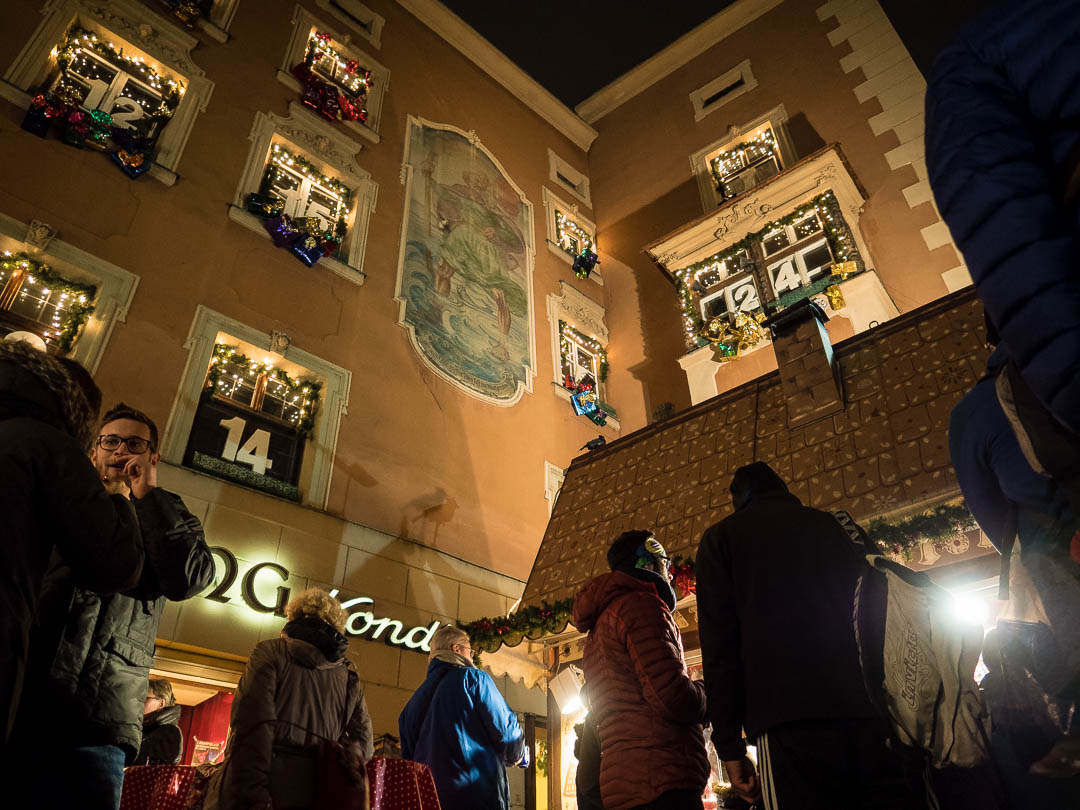 Continuing towards the Inn river we came across a big town house which windows were decorated as Advent Calendar, marking down each day from December 1st to December 24th. In the stalls between the houses we found the usual Christmas decorations for sale. 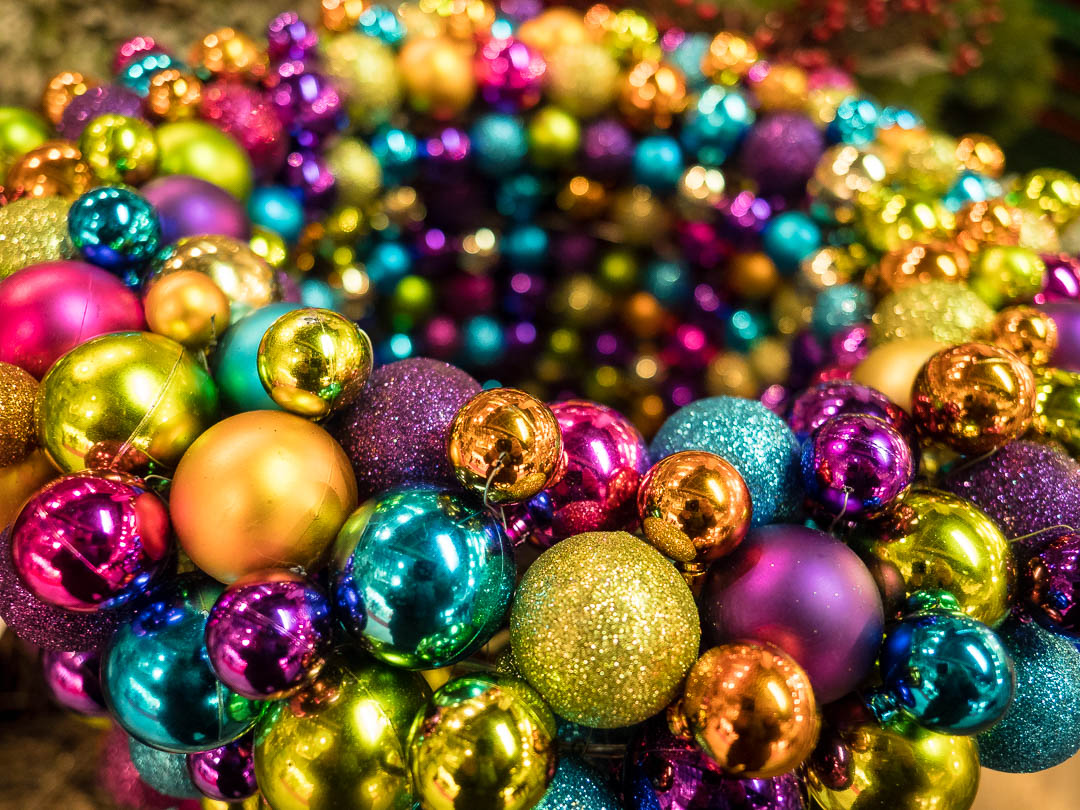 The Kiebachgasse (below) was decorated as Märchengasse (Fairytale Alley), with figurines from many known fairy stories decorating the houses. 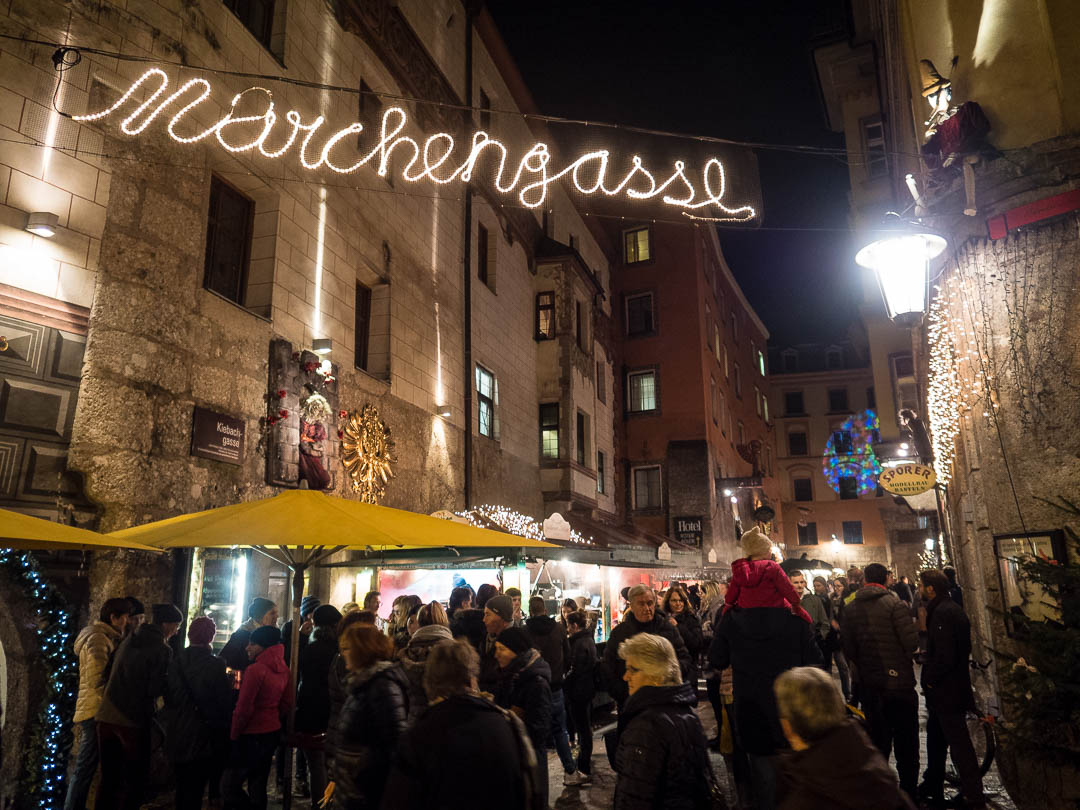 Near the Inn we found a duo of Christmas Angels, posing readily with smiling kids. Aren’t they all radiating the joy of Christmas? I converted the photo to monochrome because here the glow of the hair and the wings is even more obvious as in the colored version. 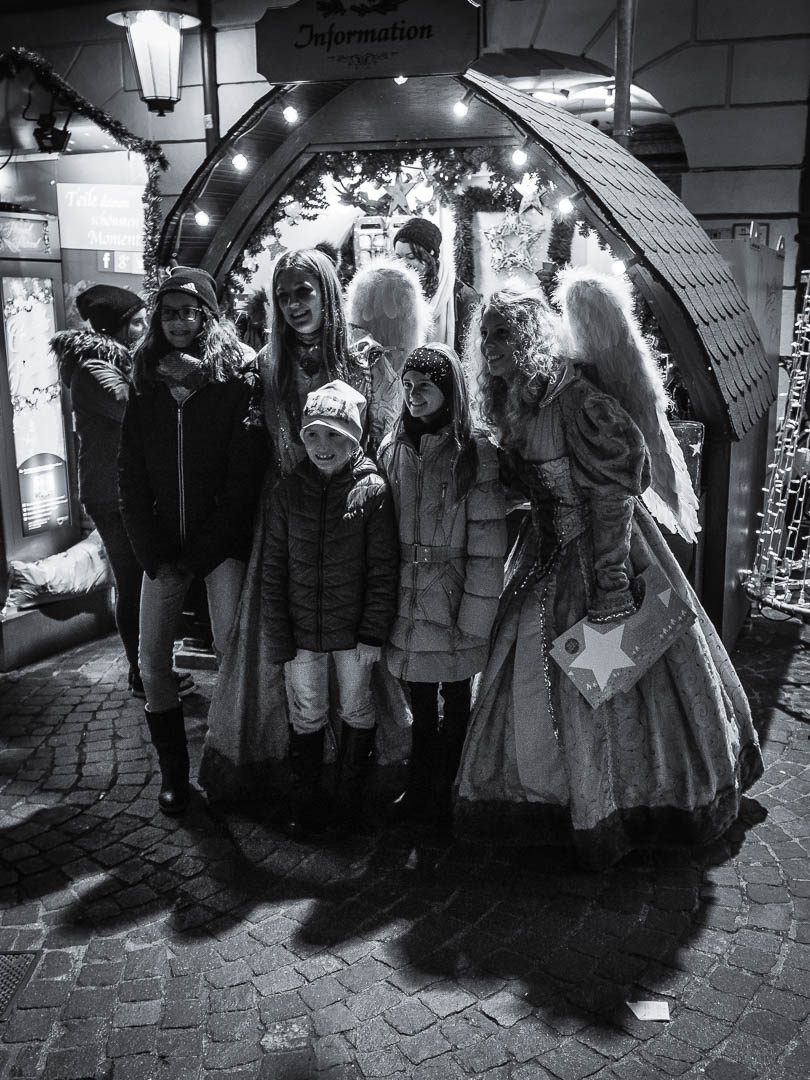 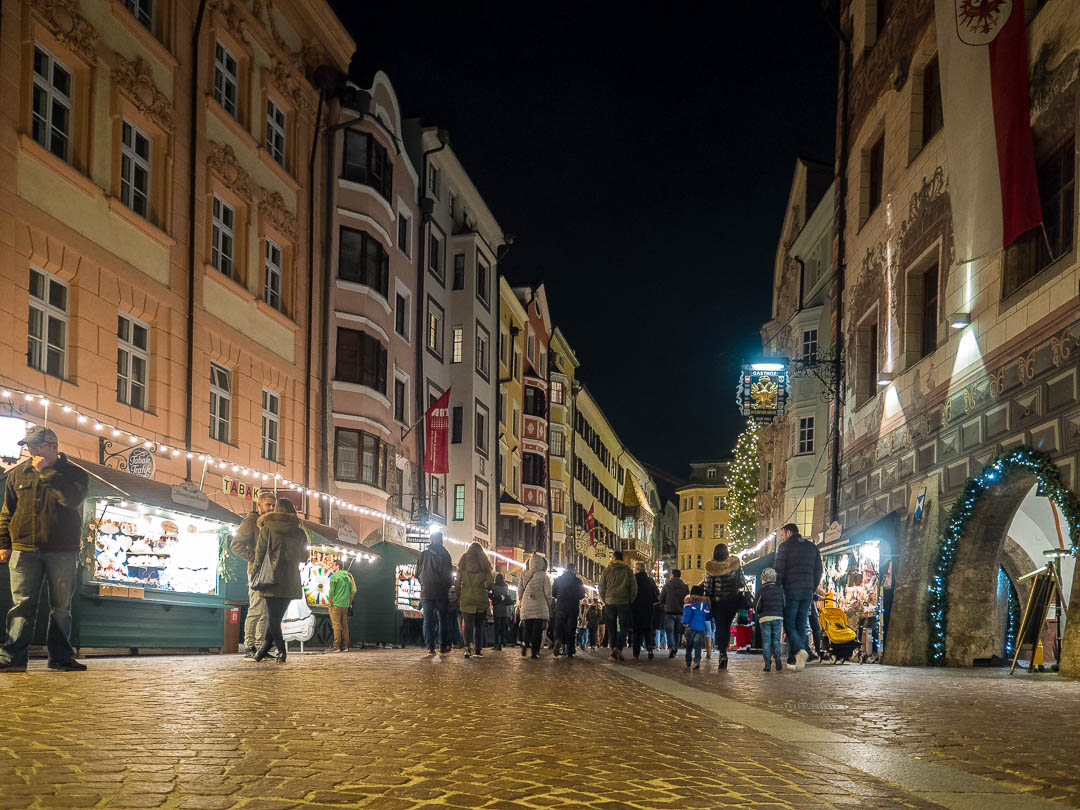 Continuing down Herzog-Friedrich-Strasse (above) we came to the banks of the Inn river where on the Market Place was yet another Christkindl-Markt, dominated by a huge Swarovski Crystal Christmas Tree. 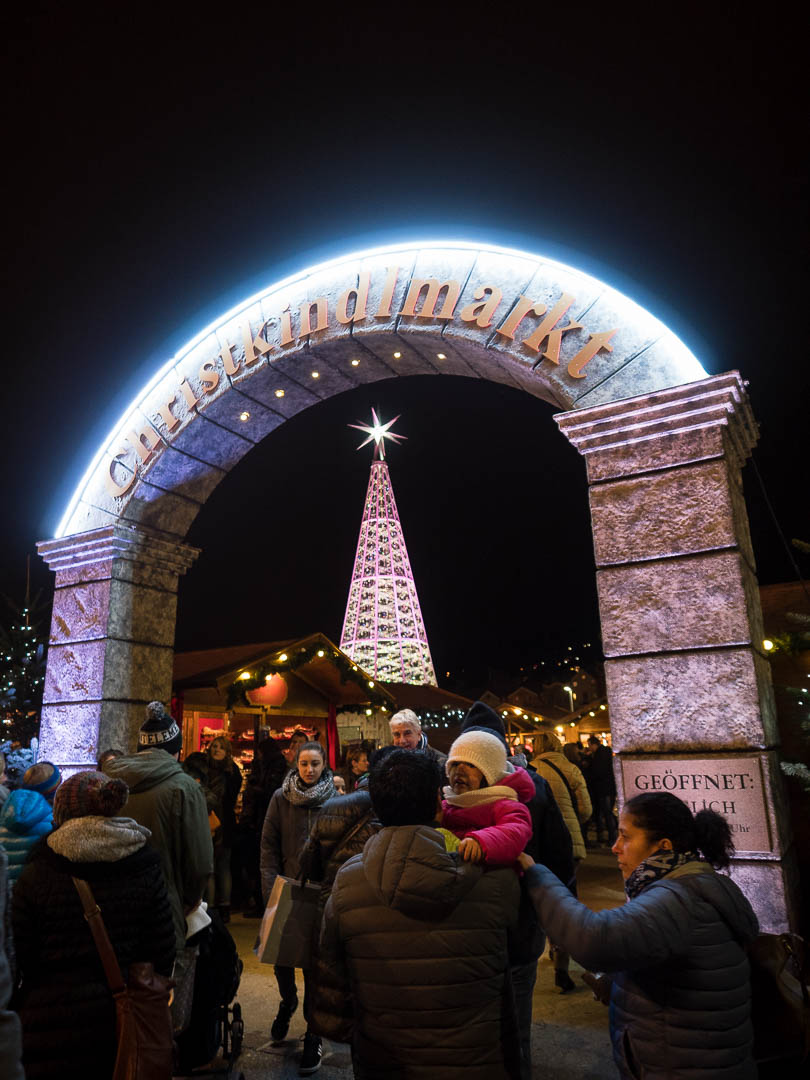 Also here we found plenty of pretty christmas decorations for sale.I really liked these glassy ones you see in the shot below. 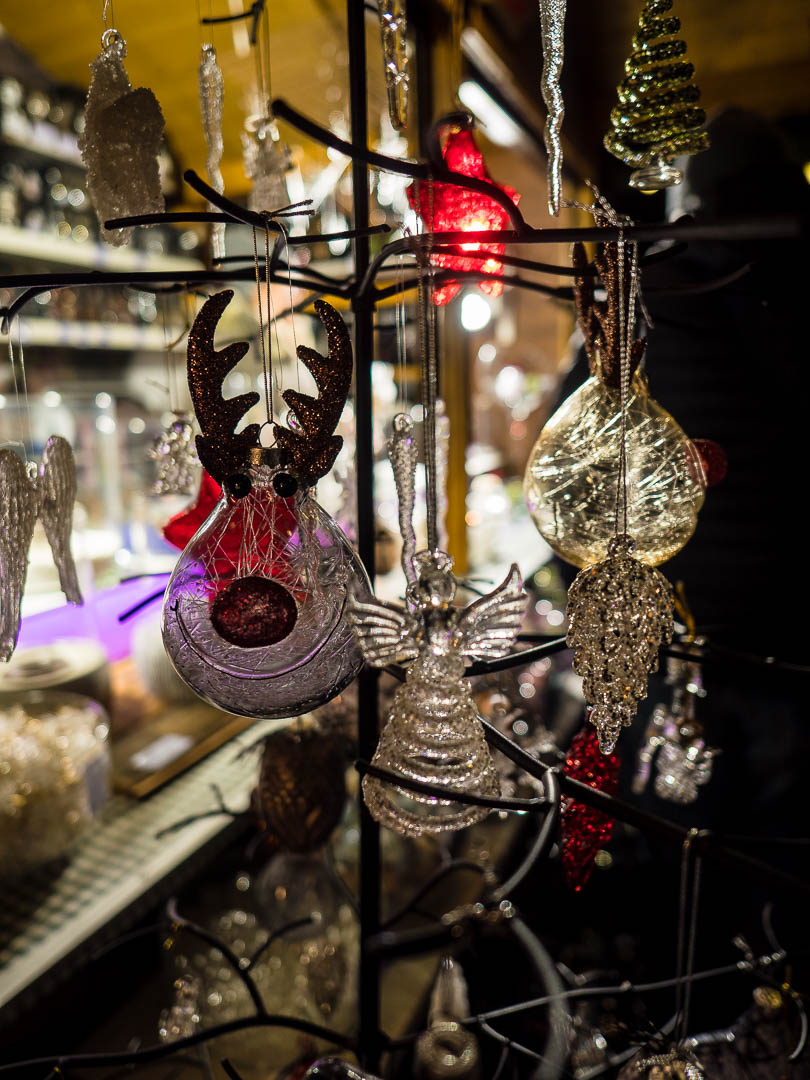 Vintage Carousels provided plenty of entertainment for the young visitors. We had a 17 month old with us who had the very first carousel ride of her life. That was definitely an event. 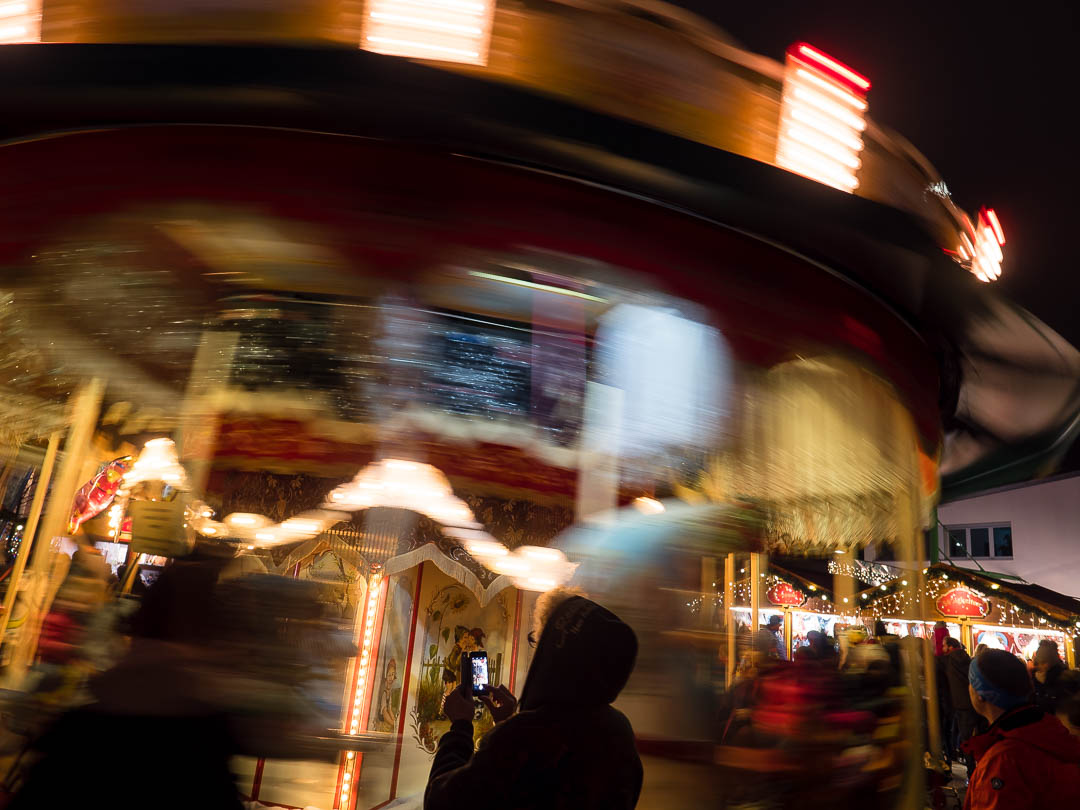 And then of course there were the nicely lit wooden stalls that sell mulled wine and other spirits (like a “Feuerzangenbowle”) that provided plenty of resting opportunities for the adults. 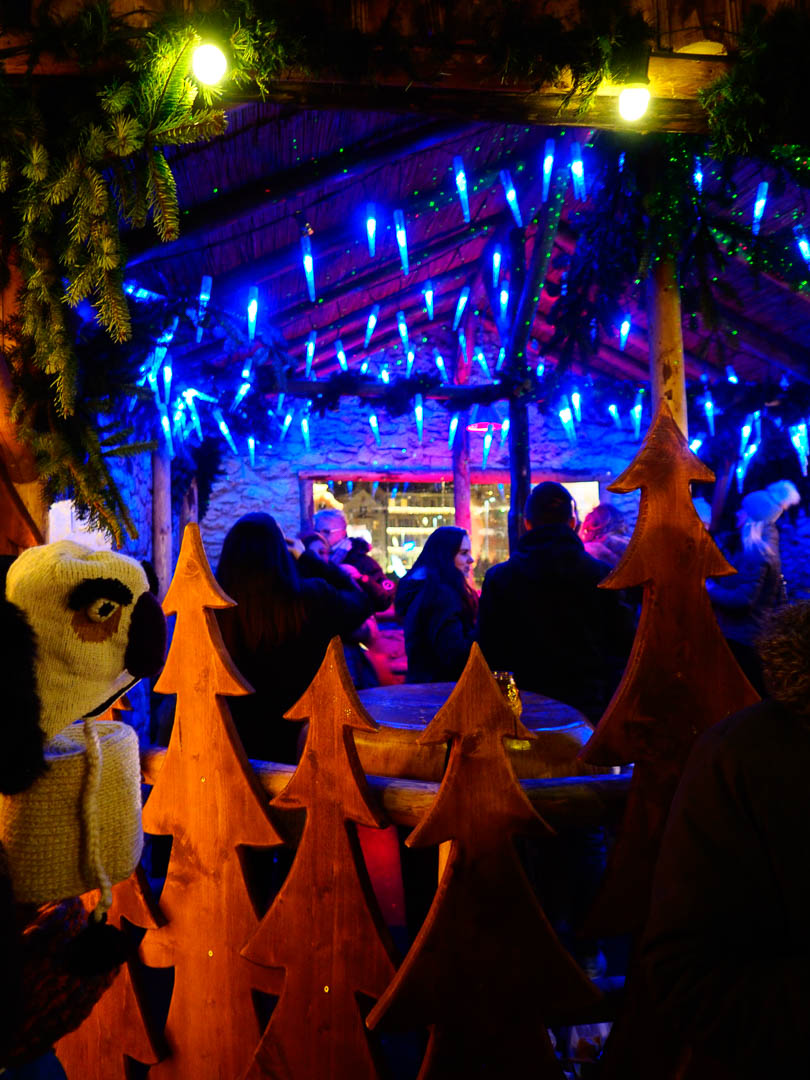 Below a shot off the huge all-crystal christmas tree. The pity was that there was no wind whatsoever. The tree probably would have sparkled a lot more would the crystals have been moved by a light breeze. On the bright side, that way it wasn’t all that chilly…. 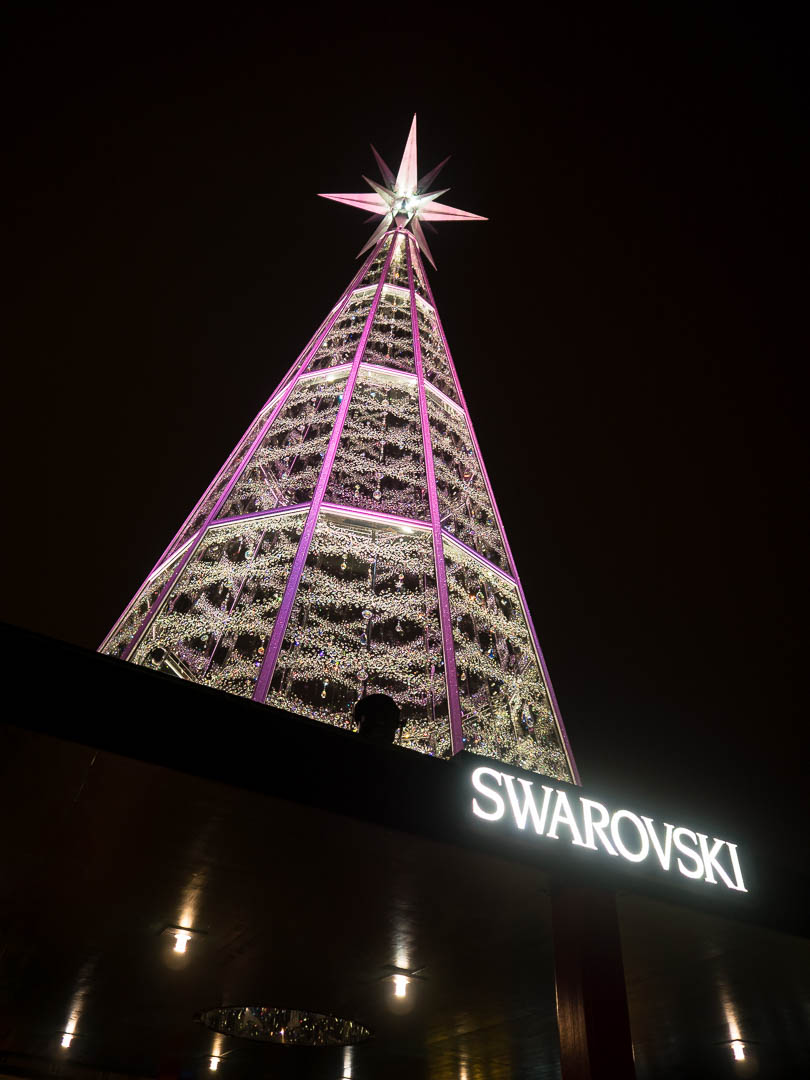 Closing out with two images from the banks of the Inn with the illuminated historic houses on the other side and a monochrome conversion of a chandelier shot I hope you liked this little excursion into the festive Innsbruck.

All images were taken with my Olympus PEN-F and the mZuiko 12mm f/2.0 prime lens and were taken hand held. I tend to use more and more the 12mm (equals 24mm in full frame) lens for city walks when sightseeing is the focus. It has amazing low light capabilities and IQ is sublime. 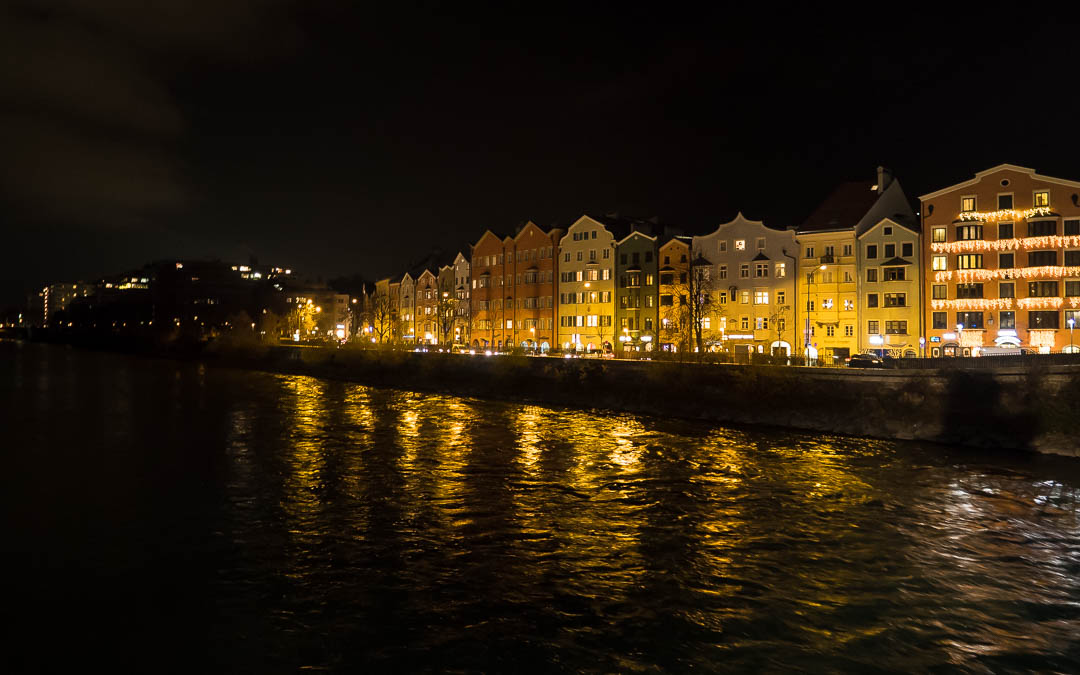 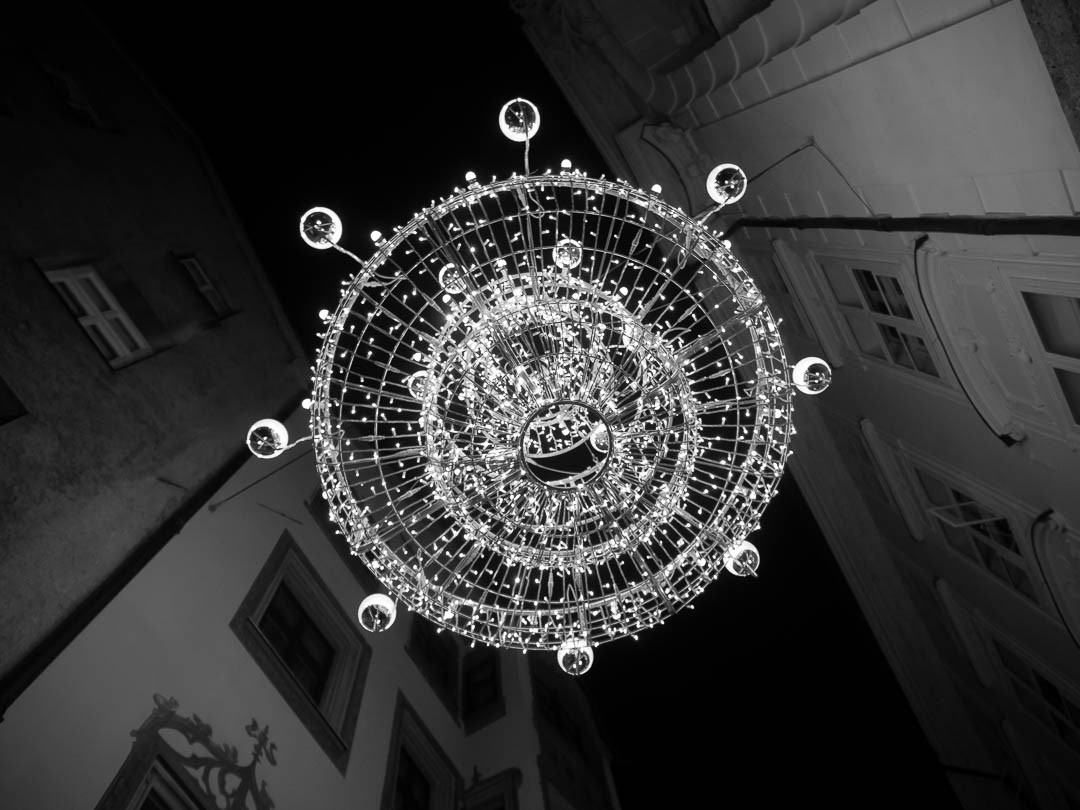 23 thoughts on “StoNur on the Road – Innsbruck Christmas Markets”