After a strenuous travel (Nuremberg-Amsterdam-Seattle-Drive to Portland) I went direct to the office for a first set of meetings. When I got into the hotel I was on a 26 hour day, minus two and a half of sleep I caught on the plane. This happens regularly and it doesn’t kill me as long as it doesn’t happen every week. Weather was gruesome and as feared, my super tight schedule didn’t allow me to see much of Portland during this visit at all. At least I stayed in downtown this time, in the very nice boutique hotel “The Heathman”, a Portland landmark (opened 1923) and recently the set for a few scenes in the movie “50 Shades of Grey”. An complementary upgrade to a suite really made my evening after this super long day. The hotel is beautiful with a stunning library and plenty art work. I plan to do a separate post about it in the future. To learn more about a cooking event I participated in and see photos of two of the PNW’s stunning volcanos continue reading after the jump…

As team building event at the start of the project we took everyone cooking to the “Kitchen at Middleground Farms” near Wilsonville. Divided into six groups and under tutoring by experienced chefs we created a buffet full of tasty food, having a blast doing so. Some example of the food you can see below. I also had some excellent Oregon Red Wine to go with it. I never realized that Oregon produces great wines in the Portland area. I snapped the images below (plus many more that are censored 😉 ) with the PEN-F and the mZuiko 12mm F/2.0. A great cam/lens combo for unobtrusive event photography, because you don’t need flash as this lens lets in a lot of light. 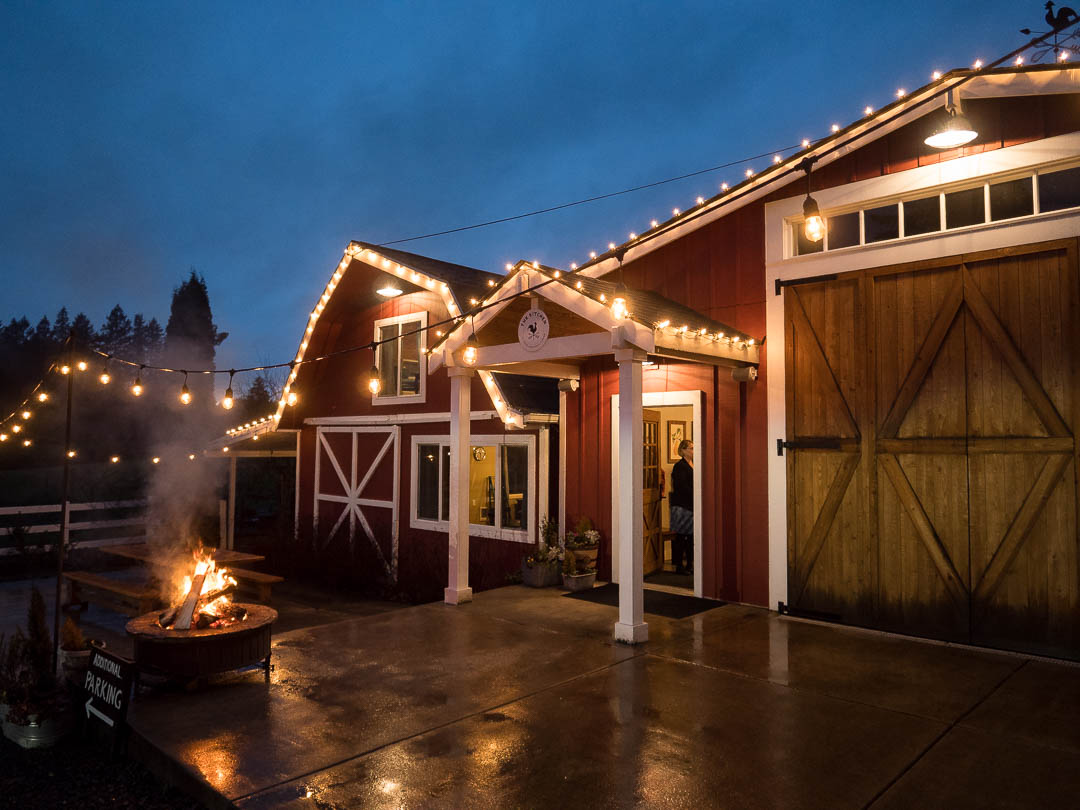 So after two intense days of meetings and a bit of evening fun I  headed back to Seattle for my flight home on Saturday around noon. While the drive to Portland was completely washed out through torrential rain, the Friday afternoon drive back to Seattle was in great weather. And I finally got to see my mountains, as between Portland and Seattle on Interstate 5 you drive along the Cascade Range and are able to see the giant volcanos Mount Hood, Mount Adams, Mount St. Helens (the one with the top blown of on May 18th 1980, one of the most powerful volcanic eruptions in the 20th century) and Mount Rainier. Mount Hood (you can see photo with an areal view of it that I took on my last flight into Portland here) is the one closest to Portland.  With 11,239 feet (3,426 m) it is the highest peak in Oregon.

Can you believe I took this while driving by myself on the Interstate over a bridge crossing the Columbia River. Image specs was 1/500 sec @ f/7.1 and ISO 200. Please don’t try this at home. I converted the photo to monochrome because I was not that happy with the colors, that had a very bluish cast that probably came because of the tinted car windows. But in monochrome it looks ok.

The sight of Mt. Rainier, the highest mountain of the Cascade Range in the Pacific Northwest and the highest mountain in the U.S. state of Washington was one of the highlights of this trip. This large active volcano located 54 miles southeast of Seattle has a summit elevation of 14,411 ft (4,392 m). On a free weekend in the summer I definitely plan a visit to the mountain and its National Park.

Also this photo I took while driving on Interstate 5 towards Seattle. Image specs where 1/200 sec @ f/5.6 and ISO 200. Camera for both mountain photos was the PEN-F with the mZuiko 14-150mm Travel Zoom.

As I write this I’m having a coffee in a Barnes & Noble bookstore and enjoying the free WiFi there. The internet in the Holiday Inn Express Seattle North I was staying the night was unusuable.  The original idea was to do some shooting in downtown Seattle, but the weather is just to gruesome once more. I’ll save this for one of my next trips. But now I’m looking forward to a week back home before returning to the PNW. Will head to the airport now.